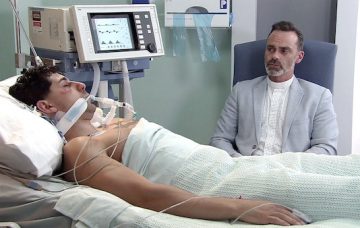 It won't be a popular decision!

Coronation Street’s Daniel Brocklebank has hinted at a surprising storyline for his character Billy Mayhew.

In fact, residents of Weatherfield will be shocked AND appalled when the Street vicar attempts to “rehabilitate” rapist Josh.

Read more: Coronation Street fans raging as Kayla ‘gets away with’ kidnapping Bethany

In scenes to air next week, Josh is beaten to a pulp and left for dead after Billy tips off a stranger about his evil nature.

When David informs Billy that Josh may have a new victim after befriending a man called Ethan, Billy intervenes by warning Ethan that Josh is a rapist.

Although he thought he was doing the right thing, Billy is left feeling immense guilt when Ethan attacks Josh, who is rushed to hospital with serious injuries.

Speaking about the storyline to Digital Spy, Daniel explains that Billy is left feeling responsible, which ultimately leads to him trying to help Josh.

But it won’t be a popular choice…

He says: “Billy endlessly seems to do the wrong thing whilst trying to do the right thing.

“When Billy discovers what’s happened to Josh, he feels terrible because he has caused it. Yes, he has stopped someone going through the trauma of what David went through, but he has now actually managed to get someone beaten up so badly that they are near death.”

Asked what this will do to Billy’s conscience, Daniel replied: “Billy feels guilt towards Josh, but this could be a potential opportunity for Billy to maybe help Josh and rehabilitate him and find out why he has done the things that he has done to David and potentially stop it from happening again to someone else, but going at it from a different angle.”

Hmmm, we really don’t think that will go down well with the residents of Weatherfield, Billy!

Is he about to make his biggest mistake yet? (And he’s certainly made a few!)

Corrie insiders have already revealed that Josh won’t be brought to justice in a traditional way – so we’re guessing he’s not going to prison.

But will Billy help him see the error of his ways?

Do you agree with Billy’s decision to help Josh? Leave us a comment on our Facebook page @EntertainmentDailyFix and let us know what you think!