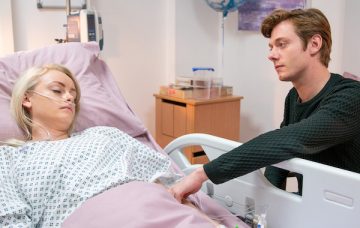 More tough times ahead for Sinead and Daniel

Just when they thought life couldn’t get any tougher, Daniel and Sinead are set to discover that their newborn baby has been born with a devastating condition.

After the oncologist breaks the upsetting news that pregnant Sinead’s cancer has spread, Daniel and Sinead are stunned when the doctors announce not only do they need to start radiotherapy immediately, but that they need to deliver her unborn baby that very same day.

As the pair struggle to get their heads around the latest bombshell that’s been dropped on them, Sinead is touched when her nearest and dearest arrive at the hospital, having heard the news, and throw her an impromptu baby shower.

When Sinead is taken to theatre later that day to have her baby, the pair’s joy at meeting their new son is short-lived when he is whisked away to special care.

But events then take a dramatic turn when Sinead loses consciousness after giving birth, leaving Daniel terrified that he’s about to lose his wife and newborn son on the same day.

As Sinead fights for her life, Daniel introduces Ken to his tiny grandson, explaining that they have decided to name him Bertie as a nod to Ken’s Uncle Albert.

Ken’s thrilled and when Sinead recovers from her ordeal he decides to make peace with her after the way he first treated her.

But just as things are starting to look up, Daniel’s world is turned upside down when the doctor explains he needs to examine Bertie privately.

Daniel is left devastated when the specialist reveals that Bertie has a bowel condition, but when Sinead asks after her son, he covers and keeps their baby’s devastating diagnosis a secret, not wanting to upset her.

But when Tracy later finds out from Beth that Daniel is keeping Bertie’s health problems a secret from Sinead, she decides to intervene and tries to get him to talk to his wife.

However, as Sinead comes face-to-face with Bertie properly for the first time in the premature baby unit, will he be able to bring himself to break the news their son’s life is in danger?

Do you think Daniel is right to keep such a huge secret? Leave us a comment on our Facebook page @EntertainmentDailyFix and let us know what you think!