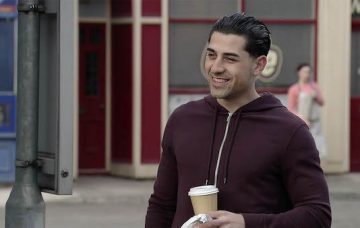 The attacker of David Platt, Josh Tucker, is set for a return to Coronation Street.

According to a report in The Sun, Ryan Clayton, who played rapist Josh, will be returning to Weatherfield to torment victim David Platt.

David is currently in prison for helping his brother Nick steal £80,000 off grandmother Audrey.

But according to The Sun’s Bizarre column, David’s ordeal won’t end once he is released from prison as Ryan will return to play the rapist later this year.

Instead David will be put through the ringer when Josh returns back into his life 18 months after raping him.

The former Coronation Street actor, who left the cobbles as evil Ryan last year, has reportedly agreed terms for a return to the channel ITV, but he’s staying tight lipped about what exactly the role will entail.

Ryan first appeared on Coronation Street in January 2018 as a mechanic going for the position at Webster’s Autocentre.

He suggested they have a charity boxing match in honour of Luke Britton, who had been killed by Pat Phelan.

Josh and David became close friends but whilst on a night out, Josh spiked David’s drink and raped him.

He later tried to convinced him they had a consensual one-night-stand but David, who is in a relationship with Shona Ramsey knew it wasn’t.

David soon went to prison himself for putting his sister’s then-boyfriend Gary in the hospital during a boxing match.

After Gary defended David in court, David was sentenced to community service which vicar Billy attended.

When one of the guys made homophobic comments to Billy, David joined in. Billy confronted David who opened up about Josh raping him.

Billy and David tracked down Josh, and Billy warned another man who planned to meet Josh what he had done to David.

Josh was beaten up by the man and hospitalised, being left blind. Feeling guilty, Billy allowed Josh to stay at his flat leaving David angry.

When Billy found out he had raped a man named Dec and possibly others, he threw Josh out.

The hairdresser eventually got some form of closure when he bundled Josh into his car, convincing him he was taking him to the police station, when he wasn’t.

Seeing Josh in fear, David got closure and left him alone in an alleyway.

Speaking at the time of his exit Ryan admitted he feels “grateful and blessed” to have starred on Corrie.

He tweeted: “That’s all folks for Josh Tucker. What an honour @itvcorrie . Feeling so grateful & blessed – From being apart of this storyline/ working with such talented & sound people/ All the kind words & support from loved ones & complete strangers. It’s meant the world to me (sic)”

Ryan and Jack worked with Survivors Manchester – a charity supporting men who have been the victims of sexual abuse – on the hard-hitting plot, and Ryan has thanked the organisation for their help with the storyline.

He wrote: “And of course more importantly than me being a soppy [bleep], for anyone affected by this storyline please don’t suffer in silence – when you’re ready  http://www.survivorsmanchester.org.uk/  thanks for the support @SurvivorsMcr @mrmadrigal (sic)”

Survivors Manchester tweeted: “We’re so proud of you @RClayton92 and thank you for everything.”