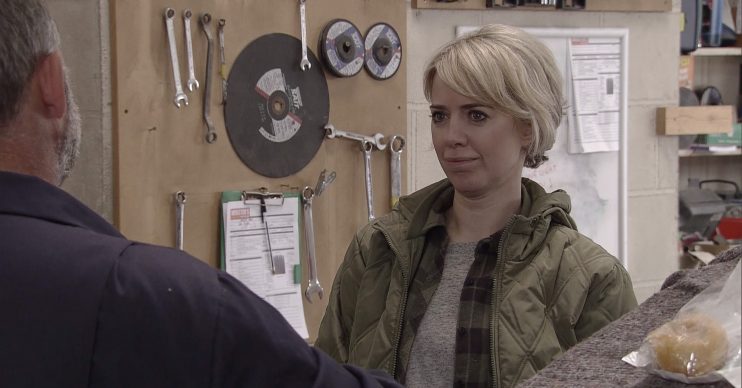 Will the mechanics succumb to their attraction?

Life finally seems to be on the up for Corrie‘s Abi Franklin, after a series of hard knocks.

She’s landed a job back with Kevin at the garage, and the pair seem to have reached an understanding.

In fact, as they enjoyed a pint at the Rovers during Friday’s episode, there was the first spark of romantic attraction!

Abi finds her boss so hilarious, in fact, she’s started posting clips of his chat on social media.

“Some of the things [Kevin] says are so funny,” she told Sally and Tim. “I’ve been making little sound clips and videos and have been posting them online.”

“Bit cruel, ain’t it?” Tim said, with Abi replying: “It’s only a joke, Kev will find it dead funny.”

That remains to be seen, but now Sally has seen Abi has spotted Kev’s charms, will she turn matchmaker for her best mate and ex-husband?

Kev should surely be attracted to Abi, as some viewers think she is morphing into his longterm former love, Sal.

The female mechanic recently got her hair chopped in a very similar style to her mate’s!

Neither Kevin and Abi have had much luck in the love department.

Kev’s last brush with romance was a date with solicitor Paula, after Sally set them up.

She turned out to be a lesbian and is now with his youngest daughter, Sophie.

Abi, meanwhile, shared a kiss with Steve McDonald, but nothing came of it.

Do you think they’re Kevin and Abi are a good soap pairing?