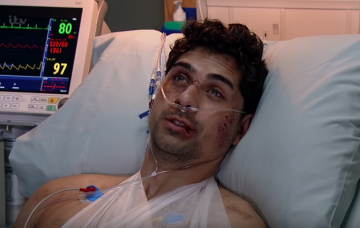 Time's ticking for evil Josh on the cobbles

The actor plays the evil rapist in the ITV soap and has confirmed that his time on the cobbles is coming to an end.

Viewers have watched as Josh drugged and raped David Platt in in distressing scenes earlier this year.

With David struggling to cope with the trauma, Josh seemingly got away with his sick crime.

However David managed to open up to his family and friends and Josh was driven from Weatherfield.

Unfortunately he soon after began his old tricks but Billy Mayhew managed to warm his next victim before anything could happen.

The man discovered Josh with a date rape drug and viciously attacked him.

Viewers were thrilled at Josh being beaten up and even happier when it was revealed he had been blinded by the attack.

But now it has been revealed that Josh’s ultimate horrifying exit is just around the corner.

Ryan told Inside Soap: “When you’re a villain, the clock is always ticking.

“Josh will always consider himself the victim and protest his innocence – he won’t accept that he actually did what he did to David.

“He definitely deserves justice and I know that viewers are interested to know how this will happen.

“Perhaps his punishment has already begun, with the blindness he has suffered after being attacked – but there’s still a long way to go.”

But with Josh being helped by Billy after the attack, how long will it be before he tries to assault someone else?

What do you want to see happen to Josh? Leave us a comment on our Facebook page @EntertainmentDailyFix and let us know what you think!