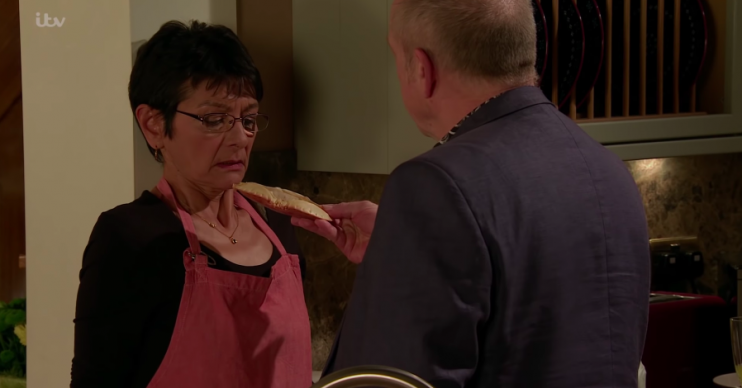 Evil Geoff has gone too far this time

Poor Yasmeen had accidentally left a tiny bit of crab in the meal she prepared for her and Geoff’s party which Cathy nearly ate.

Evil Geoff used it as an excuse to humiliate and terrify Yasmeen later in disturbing scenes.

He told her: “I asked you to dress the crab which included making sure there was no shell left in it.

“So the fact that Cathy nearly choked to death on a piece, I suppose that’s not your fault either. You didn’t care enough to do a thorough job, is that it?”

But as Yasmeen tried to defend herself and tell him a small slither of crab shell getting into the food wasn’t a huge deal, Geoff turned even nastier.

Picking up the crab shell, he thrust it into Yasmeen’s face and ordered her to eat it.

“You eat it,” he said as Yasmeen tried to reason with him by telling him she didn’t want to eat it.

“Neither did our guest, so eat it,” he said as she resorted to begging him to stop.

“You said yourself it’s no big deal so go on eat it,” he shouted as Yasmeen began to cry, leaving viewers in tears and sickened at her treatment.

One said: “Vile vile vile. Get that man off out TV screens.”

A second said: “So this is when the idiotic controlling Geoff makes Yasmeen eat crab shells from the bin. Really don’t like this storyline. #corrie”

Another said: “Geoff and that crab is the scariest thing I’ve seen on TV all year #Corrie”

Other viewers were desperate for someone to save Yasmeen from Geoff as the coercive control storyline continues to raise awareness.

Do you think the storyline needs to be brought to an end now? Leave us a comment on our Facebook page @EntertainmentDailyFix and let us know what you think!