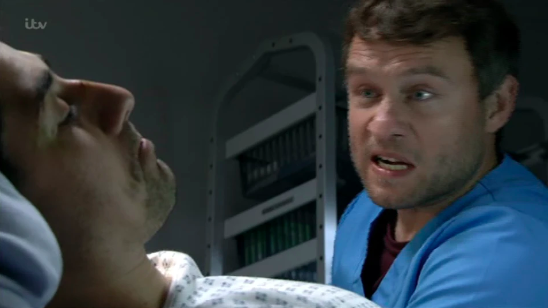 He freed David Platt from prison

On Wednesday night (November 6), fans backed Gemma’s twin brother Paul when he confronted vile Josh in his hospital bed and threatened him into admitting the truth that David Platt hadn’t stabbed him.

The delivery driver – played by actor Peter Ash – was triggered to help David because of his own dark history of sexual abuse.

After vicar Billy admitted the truth to Paul, and revealed his own attempts to talk to Josh had failed, Paul went on a one-man mission to seek justice.

Paul, who was groomed by his own stepdad Kel and is struggling to cope with his own history, was determined to help David when he discovered that Josh had set him up.

Taking matters into his own hands, he tricked his way into Josh’s hospital room by pretending to be a cleaner and tortured him into admitting the truth that it wasn’t David who stabbed him in the prison riot.

Yay, well done Paul. You so showed Josh who was boss. David is coming home.

Paul told Josh: “You know what happens to rapists inside. Everyone hates them. Murderers, gangsters, even the guards, especially the guards.

“What’s the appeal with taking advantage of someone who can’t fight back? What kind of coward are you? You’re a sick pervert and I’m not letting you get away with it.”

He continued: “I’m going to make sure you pay for what you did to David and for everyone else you hurt. They trusted you and you hurt them, humiliated them, you took something from them that they’ll never get back.”

As Josh tried to stand up to him, Paul continued: “I’ve spent more time inside than you’ve had haircuts. All the guards, all the kitchen staff that make your dinner, see I don’t have to hurt you now as much as I’d really like to.

“Because when you go back inside there’s nowhere you’ll be safe. You tell the truth and you won’t hear from me again but, if you let David go down for this, I’ll make sure your remaining time inside is a living nightmare. And I’ll be waiting for you when you get out.”

Understandably, Josh buckled and promised to tell the truth – and those watching from home were delighted that Paul had got justice for David.

One wrote: “Absolutely loving Paul tonight on #Corrie. @PeterAsh_85 is such a great actor and I love him and @Dan_Brocklebank together. Paul and Billy forever! #Pilly.”

Another said: “This is just fantastic, love our Paul.”

A third added: “Go on Paul sort him out, David needs to be out of prison by now.”

Paul is literally the best person ever. I admit I laughed when he walked in Josh's room dressed as a doctor @itvcorrie #Corrie

Yay well done Paul. You so showed Josh who was boss. David is coming home #Corrie

Later, David received news from Imran that Josh had changed his statement and he would be able to go home.

David then called Shona to tell her the wedding was back on and he’d hopefully be home tomorrow.

Do you think Josh Tucker deserved what was coming to him? Let us know on our Facebook page @EntertaimentDailyFix.