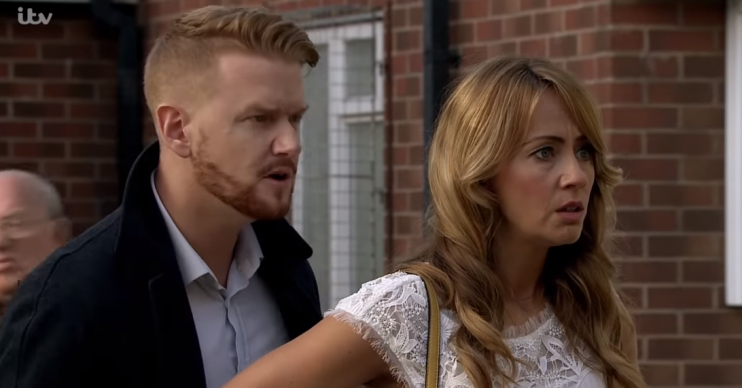 Maria is pregnant with Gary's child

Fans of Coronation Street are fed up of “stupid” Maria Connor after she took back liar and criminal boyfriend Gary Windass.

A couple of months ago, Maria and Gary got together and Maria quickly fell pregnant with his child.

They planned to move in together and Gary bought her a 4×4, but she recently found out the rumours that Gary is a loan shark are true.

Although Maria was initially furious and upset when she found out the truth, she later decided to forgive Gary.

She told him she saw Daniel with his son Bertie and remembered how hard it was for her to bring her son Liam up on her own.

The hairdresser admitted she was scared to do it again and decided to give Gary another chance as long he stopped loaning money.

In last night’s episode of the soap (January 1 2020) the pair still decided they were going to move in together.

Viewers are fed up with Maria, calling her ‘stupid’ and ‘dim’.

Maria you are a fool.. No sympathy #Corrie

Viewers have not been impressed with Maria much recently and on Tuesday she left them disgusted after outing her ex-boyfriend Ali Neeson as a drug addict.

Fans of the show know Ali and Maria dated shortly before she started going out with Gary.

Maria you are a fool.

However after Ali nearly burnt down her flat with Liam inside, as he had taken drugs, he ended thing with her.

Read More: Coronation Street viewers want Tracy and Paula to get together after one-night stand

Since she began dating Gary, Ali, along with Gary’s ex-girlfriend Sarah Platt have tried to warn her about how dangerous Gary is.

But now she knows of his crimes and is expecting his child, will she ever leave him?