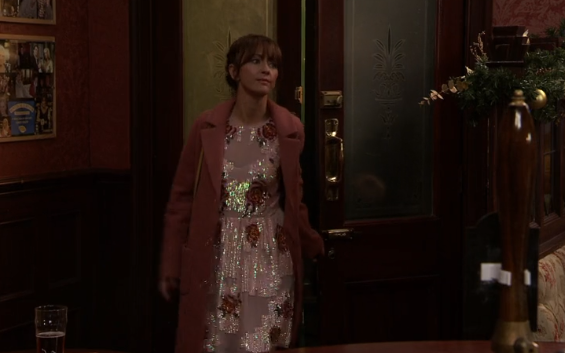 Ali had been struggling with addiction for months

Fans of Coronation Street were left disgusted with Maria Connor as she revealed her ex-boyfriend, Ali Neeson’s, drug problem to residents and friends.

Recently Maria found out her boyfriend Gary Windass, who is the father of her unborn child, is a loan shark.

But as Maria started saying she should’ve listened to Ali’s warnings about Gary, Gary told her that Ali had a drug addiction and that was the reason he nearly burnt down her flat whilst looking after her son Liam.

In last night’s episode (December 31 2019) Maria decided to forgive Gary as she didn’t want her baby to grow up without a dad, especially as she raised Liam on her own.

Later they went into the pub together and Maria was furious when Johnny didn’t want to serve Gary.

Maria is a vile spiteful cow.

She turned and said to Johnny: “Let me guess, you’ve been listening to the local drug addict, have you?”

But Rita, who was sat with Ali and his brother Ryan overheard and said: “Drug addict?”

Maria turned to Rita and said: “Did you not know Rita? He nearly burnt my flat down when he was supposed to be looking after Liam. ‘Cause he was off his face.

“So if anyone should feel ashamed round here, it’s him.”

Upset, Ali stormed out of the pub and viewers were disgusted by Maria’s actions.

I HATE Maria. There was no need to talk to Ali like that. What a cow. Cause she thinks Gary is the bees knees.
Tracy and Paula are gonna do it#corrie

Maria is a proper silly cow like how nasty #corrie

Now residents know the truth about Ali, could he lose his job as a doctor?