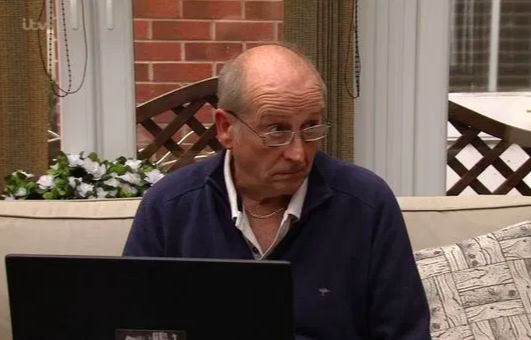 He has gone too far this time

Fans of Coronation Street are disgusted after seeing the contents of Geoff Metcalfe’s laptop.

Evil Geoff was seen on Friday night (08.11.19) searching dating sites for other women under Yasmeen’s nose in her house.

As part of his coercive control plot, Geoff then claimed he was actually doing research for his radio show, leaving Yasmeen confused.

He then tried to convince her that he was booking them a holiday to Las Vegas.

It disgusted viewers who hate what Geoff has done to Yasmeen.

One said: “Well done Geoff, how to make Yasmeen feel she is in the wrong more and more. You odious little man. #Corrie”

A second said: “#Corrie Geoff is a creep!”

A third said: “Geoff’s behaviour makes me really uncomfortable. It’s so sad watching Yasmeen become a shell of herself #Corrie.”

It is part of a major Corrie storyline to raise awareness of coercive control.

Coronation Street producer Iain Macleod said: “Many thousands of people feel trapped in relationships with someone who claims to love them but who is actually taking them apart piece by piece, isolating them from friends and family and locking them in an invisible prison of fear and insecurity.

Gradually we are seeing the long-term effects of living with an abusive partner.

“I hope this story will help anyone going through similar experiences in the real world by highlighting that feeling undermined, belittled, controlled or intimidated by your partner is never okay.

“The old ‘sticks and stones’ adage is just plain wrong – words can be instruments of torture and manipulation.”

What did you think of Geoff’s behaviour? Leave us a comment on our Facebook page @EntertainmentDailyFix and let us know what you think!