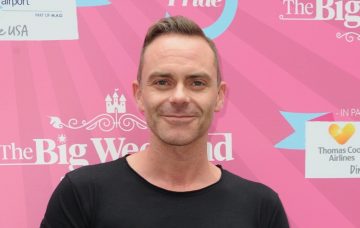 They were offended by Billy kissing scenes

Daniel Brocklebank has hit back at a Twitter troll who questioned why Coronation Street doesn’t feature a pre-show “warning” before scenes involving “two blokes snogging”.

The troll, whose Twitter account has now been suspended, insisted he was “not too keen” on watching two male characters kissing, and said his 10-year-old relative had asked “why”.

He also said there are “warnings about swearing, but not two blokes snogging”.

Daniel, who is dating former Mr Gay World Stuart Hatton in real life, replied: “Would you have the same opinion if it were a man & a woman kissing?

“How sad that a 10 year old had to learn that relationships can come in many varieties from television.”

Would you have the same opinion if it were a man & a woman kissing?
How sad that a 10 year old had to learn that relationships can come in many varieties from television. https://t.co/5wB7OQ6Zko

Read more: Jack P Shepherd ‘living in a hotel’ after moving out of his ‘wild’ flatshare

Daniel has revealed before that he suffers homophobic abuse on a weekly basis. Some of the actor’s Corrie co-stars showed their support for him by also commenting on the troll’s tweet.

Kate Ford, who plays Tracy Barlow, tweeted: “It’s simple really. I would tell your ten year old it’s because they are in love. I told my son this when he was 3 years old. It’s all good, don’t stress yourself.”

Read more: Catherine Tyldesley reduced to tears by traffic warden who called her ‘a cow’

Last year, some Corrie viewers were outraged when character David Platt, played by Jack P. Shepherd, made homophobic remarks to Billy during an episode to impress a pal.

One Twitter user wrote: “What a despicable person. David I am ashamed at you for not helping Billy out and saying something to that guy. #Corrie.”

Another posted: “How dare David Pratt treat our vicar in this manor #Corrie”

While a third shared: “Why is David being homophobic? What a [bleep] #corrie”

Are you a fan of Daniel’s Corrie character? Leave us a comment on our Facebook page @EntertainmentDailyFix and let us know what you think!