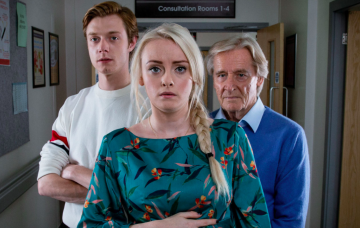 It's going to be a heartbreaking episode for the Barlows, and only the Barlows

Coronation Street is lining up a devastating four-hander episode focused solely on the Barlow family.

And more than that, he will also find out that his own father Ken has known about it for a week without telling him.

The special episode will feature only Daniel, Sinead, Ken and Peter Barlow from the regular cast.

It begins when Sinead suffers a horror collapse and is rushed to hospital where Daniel is given the upsetting news.

Full of rage, Daniel rushes home intent on confronting his father but he is stopped by Peter who tries to calm him down.

The brothers have a long, emotional conversation about Ken’s many failings as a father, unaware he is listening in from the kitchen.

Actor Bill Roache revealed: “When Daniel does find out, Ken gets the full blast of all the pent-up resentment that Daniel has lurking because he was an absent father.

“It’s a great episode, drawing on their history and bringing all those things together.”

The scenes will touch on Daniel’s previous attempt to murder his dad after discovering he had convinced Sinead to have an abortion two years ago.

And it will see mentions of Barlows past and present including Deirdre, Susan and even Peter’s ex-wife Lucy.

It will also mark a change in Daniel as he clashes with Sinead about her decision to refuse treatment to save her baby.

Actor Rob Mallard said: “Daniel is trying to process it, and for the first time, the baby becomes a foetus not a baby to him. He de-personalises from it.

“Daniel says to Sinead that whilst she is trying to be this ‘mother hero’ that can throw her child to safety even if it costs her her life, Daniel has been on the other side, knowing what it is like to grow up without a mum.

“So he feels that she is not being brave – she is doing something that could eventually be very cruel.”

But with Sinead sticking to her guns about saving her baby above herself, there’s going to be an emotional battle to come as Daniel is pushed further into facing up to a future without either his wife or his baby.