Coronation Street is set to have a dark Christmas episode this year.

Usually the soap prefers to have a feel-good instalment on Christmas Day - but this year the episode will only start out that way.

She told the Star: "I've just received scripts for Christmas. What I can say is it's beyond dramatic. It's big and edge-of-your-seat stuff. It's not just one story either. Corrie's Christmas this year will be much darker than usual (Credit: ITV)

"There are several big stories happening. We usually have feel-good Christmas episodes. And this year it certainly starts off that way.

"People will want to tune in for it on Christmas Day. My advice is not to have too much turkey and eggnog so you'll still be awake enough to watch it!"

It's beyond dramatic. It's big and edge-of-your-seat stuff.

Jennie McAlpine added: "I've read the script for Christmas Eve. It's quite dramatic. I'm not sure if I'll be getting any turkey this year. Fiz is going to be quite busy!

"It's not all mistletoe and jingle bells. I can't say if anyone dies. If I told someone that, I'd have to kill them!" 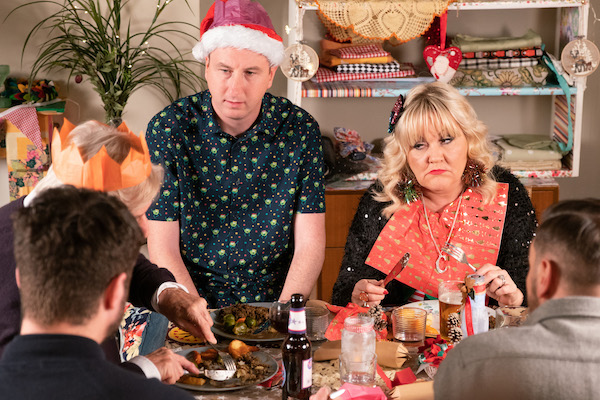 Last year's Christmas was a hoot compared to this year's (Credit: ITV)

The soap is currently filming Christmas and New Year episodes and pictures have revealed many dramatic storylines.

It is believed Michelle and Robert's wedding will take place over the festive season.

Both Kym Marsh and Tristan Gemmill will be leaving the soap this year, so could it be happily ever after?

She will discover the truth about him abusing her son Paul as a child and attack him in a shopping centre where he works.

Reports have claimed she will try to kill him for what he has done. So definitely not a light and airy Christmas!

What are you looking forward to at Christmas? Leave us a comment on our Facebook page @EntertainmentDailyFix and let us know what you think!