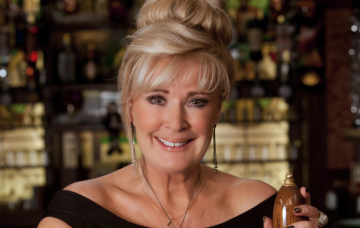 She doesn't think the storyline was true to character...

Actress Beverley Callard has risked angering Corrie scriptwriters, by admitting she did not agree with their decision to make her character Liz McDonald have an affair.

In a bold move for an actress, the 61-year-old stressed that she didn’t think her character would embark on a fling with a married man.

Appearing on Loose Women today (Wednesday 12 December), Bev told hosts including Coleen Nolan that she really did not want to film the plotline which involved Johnny cheating on wife Jenny with Liz.

She said: “I have to tell you, when they first gave me the scripts and Liz slept with Johnny I was like, ‘nope, nope! I don’t want to do this’.”

She continued: “Because Liz would never do that, I don’t think, to another woman. I don’t think she would have slept with a married man. But I have no say in that.”

The fan favourite went on to say that she usually loves the scriptwriters ideas and this was an exception, saying: “More often than not, you get scripts and you just love them and think, ‘oh wow, this is amazing!’

“But occasionally you can think, ‘I just don’t think she would do that’.”

Bev, who has played Liz for 30 years, added: “We know our characters so well and how we’d react to each other. Liz always makes wrong decisions, but I just felt she wouldn’t do that to another woman.”

In the current storyline, Jenny is devastated to discover the truth about the affair and becomes convinced it’s still going on, even putting a tracker on her husband’s phone.

In the interview, Beverley also admitted she despises her character’s dress sense and sometimes hates leaving the dressing room.

She said: “They are disgusting, sometimes I go into the dressing room and the clothes are there and they’re just sort of laid on a chair for you to wear and sometimes I look and think ‘I dare not set foot outside of this dressing room’. They are horrific.”

She also admitted she refuses to tune into the soap, as she can’t watch herself.

Do you think Liz McDonald’s affair was out of character? Leave us a comment on our Facebook page @EntertainmentDailyFix and let us know what you think!