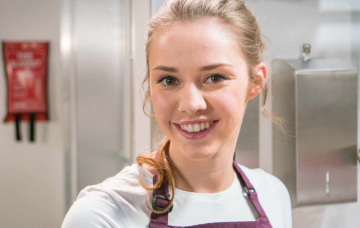 All you need to know about Kayla Clifton

Kayla Clifton’s arrival on the cobbles has proved that Bethany Platt’s grooming nightmare is still not over, a year after evil Nathan Curtis and his creepy accomplices were arrested.

But who is Kayla? And why does she have a vendetta against Bethany?

So why does Kayla hate Bethany?

Well, it was recently revealed that Kayla’s dad is none other than bent copper Neil Clifton. A friend of Nathan’s and one of Bethany’s rapists.

He was also Craig Tinker’s mentor when Craig first joined the force and it was the rookie policeman who ended up grassing Neil up by secretly recording him admitting he’d had sex with Bethany.

Neil is currently in prison for his vile actions but Kayla doesn’t believe her dad is capable of such acts.

Why is she dating Craig?

Kayla thinks that Craig is her ticket to help her dad get out of prison. It was recently revealed that Neil is appealing his sentence and Kayla wants to help.

She thinks that she get Craig to tell her some stuff about Bethany to prove she isn’t the innocent victim that everyone thinks.

And she’s doing a pretty good job so far, having already got Craig to admit that Bethany worked as an underage lap dancer.

She’s also hoping to drive a wedge between Bethany and best mate Craig, leaving the trainee beautician with no one.

So when did Neil rape Bethany?

Last year Bethany – played by Lucy Fallon – believed she was in a loving relationship with Nathan.

She was horrified when he introduced him to one of his friends, Neil.

Nathan went crazy at Bethany when she let some people take Neil’s expensive photography equipment from the flat. He then told her she could make up for her mistake by sleeping with Neil.

Unaware to Bethany, Neil had paid Nathan to have sex with her.

She eventually reported Nathan to the police and he and Neil were arrested charged with grooming and rape. They were both jailed after a court case where Bethany bravely gave evidence.

What do you think of the latest twist in Bethany’s story? Let us know by commenting on our Facebook page @EntertainmentDailyFix!