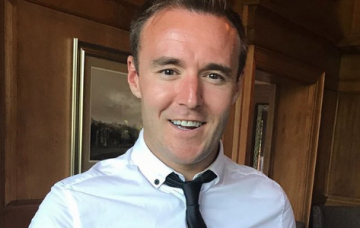 The actor has ABS

He’s been on our screens for 20 years playing fan-favourite, Tyrone on Coronation Street – but we’ve never seen Alan Halsall in quite this light before.

Alan, 36, took to Instagram on Friday to show off his incredible body transformation and – prepare yourselves – because this TV star now has some serious abs.

Another said simply: “You look amazing.”

Others added that he was their new body inspiration, writing: “Wow Alan…..i need your motivation to hit the gym 😃”.

It’s a welcome holiday for the hard-working actor, who has been hitting the gym hard since his split from fellow actor, Lucy-Jo Hudson earlier this year.

Speaking to The Sun, dad-of-one Alan recently revealed: “I’ve transformed myself a little bit and people have seen that.”

Alan and Lucy-Jo – who also starred on Corrie as Katy Harris between 2002 and 2005 – confirmed the decision to end their marriage of nine years in May.

The statement read: “I can confirm that Al and I are divorcing. We remain friends and devoted mummy and daddy to our daughter Sienna.

“She wasn’t so keen on going to school this morning bless her… she just wanted to stay at home and play with her new toys!!! Well who wouldn’t?”

Alan wrote his own tribute alongside a picture of his daughter’s mermaid Barbie birthday cake.

He wrote: “I can’t believe that my beautiful little princess is 5 today. Time really does fly when you are a parent, but I cherish every moment with you Sienna-Rae. You are my happiness, my strength and my whole world.”

A loving dad AND that body? This is a Tyrone we want to see more of, please.

Are you impressed with his body overhaul? Leave us a comment on our Facebook page @EntertainmentDailyFix and let us know what you think.