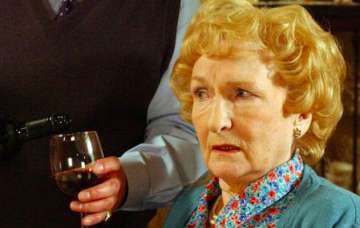 She has been on the cobbles for a long time

Eileen Derbyshire MBE is best known for her role as Emily Bishop in Coronation Street.

The actress has been with the cast of Coronation Street since the 1960s and has had some dramatic storylines on the soap.

Here are 10 facts about the actress.

1. She has been in Coronation Street since 1961

Emily first appeared in the show as Miss Nugent in January 1961, however she wasn’t given the forename Emily until 1962.

She worked at the Mission Hall and met many of the Corrie locals when they were forced to stay the night there following a gas leak.

She ended up on the Street working for Gamma Garments as head assistant.

2. She is the longest-serving female cast member in a British soap

Eileen has been playing Emily for 55 years giving her the title of longest-serving female cast member in a British soap.

3. Eileen has been married for 53 years

She married Thomas W. Holt on April 1, 1965. Her husband is a retired engineer.

They live together in a cottage in Cheshire and Eileen is a keen opera fan.

4. They have a son together

Eileen and Thomas have a son named Oliver. He is a sports journalist.

Oliver has three children of his own, making Eileen a grandmother.

She was awarded an MBE in the 2010 Queen’s Birthday Honours list with her fellow co-star and friend Barbara Knox, who is known for her role as Rita Tanner in Coronation Street.

6. She is a private person

Eileen is said to be a private person, rarely appearing out of character on screen.

In 1988 she gave a rare interview in a documentary tribute to fellow cast member and friend Margot Bryant who played Millie Caldwell in the ITV soap.

In 2005 she also gave an interview for an ITV programme aimed at deaf viewers. She spoke about working with deaf actress Alison Briggs who played Emily’s niece Freda Burgess in Coronation Street.

She does not attend award ceremonies or other events with cast members.

7. She is a godmother to two of her co-star’s children.

She is a godmother William Roache’s (Ken Barlow) three children.

She is also a godmother to Barbara Knox’s child Maxine.

8. She has a degree in teaching

She trained at the Northern School of music and passed her examination at the Royal Academy of Music.

She began teaching speech and drama but always wanted to act.

9. She appeared in Repertory Theatre

She enrolled at Chorlton Repertory Theatre starting as a student and later became an assistant stage manager.

She went on to join Century Theatre’s touring company and appeared in theatres all over the country.

10. She is currently on a break from Coronation Street

Emily hasn’t been on our screens for a while.

In January 2016, Emily departed the street to go and visit her nephew Spider in Peru.

Eileen needed to take some time off. She was due to be off for six months however she has not returned yet.

The character Emily returned to the UK in January 2018 to look after unwell niece Freda.

Do you miss Emily on Corrie? Leave us a comment on our Facebook page @EntertainmentDailyFix and let us know what you think!