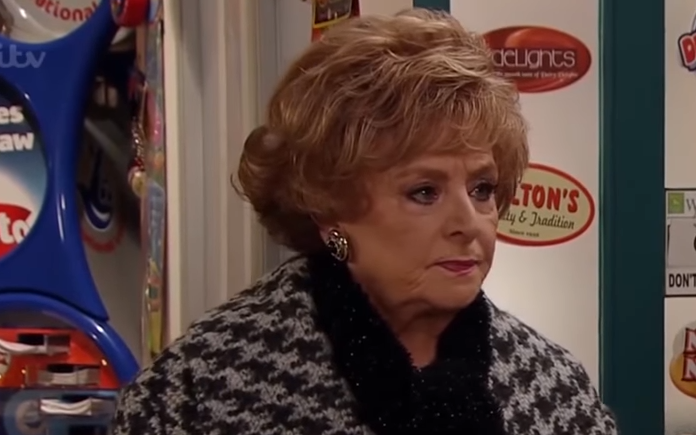 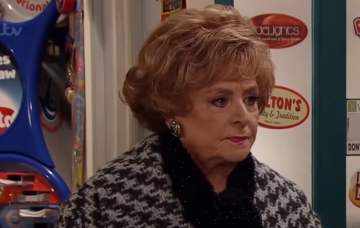 Barbara Knox is best known for her role as Rita in Coronation Street. She has played the character for almost 47 years.

Barbara has had plenty of big storylines on the cobbles including being chased by Alan Bradley through the streets of Blackpool, being trapped during the 50th anniversary tram crash, and Rita’s brain tumour.

Here are 10 facts about the Coronation Street legend:

1. Barbara has been married twice

Barbara’s first marriage was to Denis Mullaney in 1956 and they had three children together named Maxine, John and Amanda.

2. She left school at a young age

Barbara left school at the age of 15 and worked as a telegraphist in the post office, learning shorthand and typing, and had to pass Civil Service exams.

She went on to work in offices, shops and factories whilst taking part in amateur theatre.

Barbara’s first acting gig was on the stage. Carl Paulsen, who ran Oldham Rep asked her to appear in the musical The Boy Friend in 1964. That was her professional stage debut.

She then moved on to smaller television roles.

Barbara appeared in other TV shows during the 60’s and 70’s including Never Mind The Quality, Feel the Width, George and the Dragon, A Family at War and Emergency – Ward 10.

Barbara also appeared alongside Ken Dodd in the 1972 sketch Funny You Should Say That. She actually revealed on Paul O’Grady Live she had to ask Ken Dodd for permission to start Coronation Street as she had to start filming on the last week of the sketch.

She reveals she spoke to Ken’s friend about the offer who told Barbara she would sort it out. In the sketch Barbara played a nurse and she had to kneel down over him. Ken then looked up to her and said “Don’t let me down in Coronation Street.”

5. She doesn’t give many interviews

Like her friend and co-star Eileen Derbyshire, Barbara is a private person. She has attended award shows alongside her Corrie co-stars and given a few interviews for Coronation Street documentaries but rarely does public interviews.

On This Morning back in 2012, Phillip Schofield asked why she didn’t do them [interviews very often] and she replied “Well I’m not very good at them.

“Some people are very good and they can chatter and say all sorts and be entertaining but you’ve just seen I’ve just blubbed and that’s not right is it?”

Her few TV interviews include Paul O’Grady Live, This Morning and Lorraine.

6. Barbara has won awards for her role as Rita

As well as having the title of MBE for her services to drama, Barbara has also won awards for her role as Rita.

In 1989 she won the TV Times Award and Oracle Teletext Award for best actress.

She was also nominated for a National Television Award for Best Serial Drama performance.

In 2004 she also received a Lifetime Achievement Award at the British Soap Awards.

7. She was charged with drink driving

It March 2014 it was reported she had been arrested under the suspicion of drink driving but wasn’t charged formally until April 4th the same year.

She appeared in Macclesfield Magistrates court later that month.

Originally pleading not guilty to the charge she was scheduled to stand trial in July which was later changed to a case hearing in October.

Barbara recorded an LP in 1973 called ‘On the Street Where I Live’. Rita was also a singer on Coronation Street.

The album featured 11 tracks and it was recorded under Philips Records.

9. Barbara is the seventh longest-serving soap actor in the world

She has been on the cobbles since 1972 when she first appeared as an exotic dancer and has been a regular character on the soap ever since. Rita did appear for one episode in 1964, but didn’t appear again until 1972.

Rita is well known for owning The Kabin shop which she runs alongside Norris Cole.

10. She is close to her old Corrie co-star

Ex-Corrie star Michelle Keegan left the soap in 2014 after her character Tina McIntyre was killed off by Rob Donovan.

Towards the end of her time on the show Michelle told Radio Times: “I am really close with Barbara.”

“When I have a scene with Barbara, I know it’s going to be really good.”

Michelle also revealed Barbara would give her advice when she was struggling to deliver a line.

Tina and Rita were also very close on screen and had many scenes together.