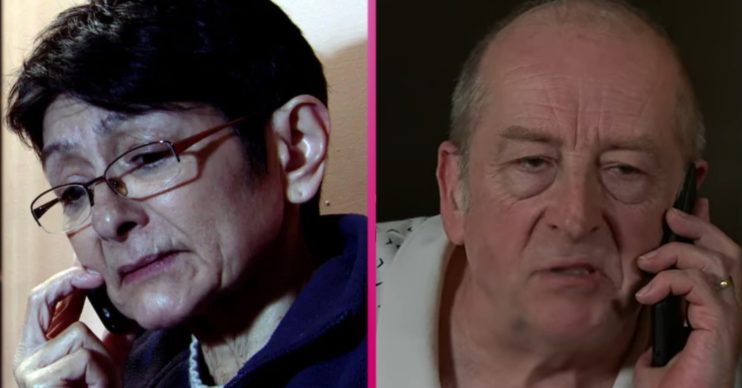 She finally stood up to him!

And although Geoff was fuming as Yasmeen gave him what for, Coronation Street fans were cheering.

Yas used her illegal phone to make a call to her hubby and tell him all about the “illuminating” visitor she’d had on Monday (July 20).

As Geoff joked it was a travelling torch salesman, Yasmeen couldn’t hold her tongue any longer.

What did Yasmeen say to Geoff on Coronation Street?

“You always think you’re so funny don’t you?” she said. “When in reality, you’re as funny as a car crash.”

Geoff darkened and demanded to know who it was. Yasmeen replied it was a woman who claimed he’d also controlled and abused her.

With her abuser almost lost for words, he demanded to know the woman’s name, but Yasmeen shot back he should know, unless Elaine was one of many he’s done this to.

She accused him of lying about his exes who he claimed bullied him and he tried to twist things and confuse Yasmeen, calling her stupid.

She said: “You manipulated me and I fell for it, I shan’t again.

“I will never, ever go back to you again, and even if I’m found guilty it will be a good result because I shan’t ever have to go to bed with you. And if I’m not guilty then the same.”

Knowing he had lost control, Geoff turned really nasty and spat down the phone: “If that’s the way you want to play it, your choice, bitch.”

“How charming,” Yasmeen replied, seemingly powerful for the first time in their relationship.

Geoff then threatened her to “get used to the view from your window because you’re going to be in that prison for a very, very long time.”

How did Coronation Street viewers react to the scenes?

Yasmeen might have been shaken after the call, but those watching at home were ecstatic about the scenes.

What an ending! In your face Geoff!! Yes Yasmeen #Corrie xx

@itvcorrie #corrie
I loved it Yasmeen when she finally told Geoff to shut up. You think your funny don’t you, your as funny as a car crash. Great job @shelleyking55 and Ian Bartholomew. We really got to see Geoff’s angry reaction.xx

Just caught up on corrie and got so gassed when Yasmeen finally stood up to Geoff, watching him realise he can’t manipulate her anymore gives me so much joy😂 #Corrie pic.twitter.com/8U9PrJc9XA

Me on the sofa watching yasmeen finally stand up for herself over Geoff! So proud 😭 #corrie pic.twitter.com/UzTUG1SRzn

The Uk cheering on Yasmeen after that epic phone call! #corrie pic.twitter.com/JG1IbWocLS

Geoff knows Yasmeen has the upper hand and he’s lost control, so he sets about trying to get rid of Elaine.

Elaine agrees to give evidence to help Yasmeen in court, which leaves Alya relieved.

But Geoff is determined to come out on top and convinces Tim the woman is lying.

Sally isn’t sure that Elaine’s the liar in this situation, but will Tim believe his wife or his dad?

And will Elaine stick around and face her abuser to save Yasmeen?