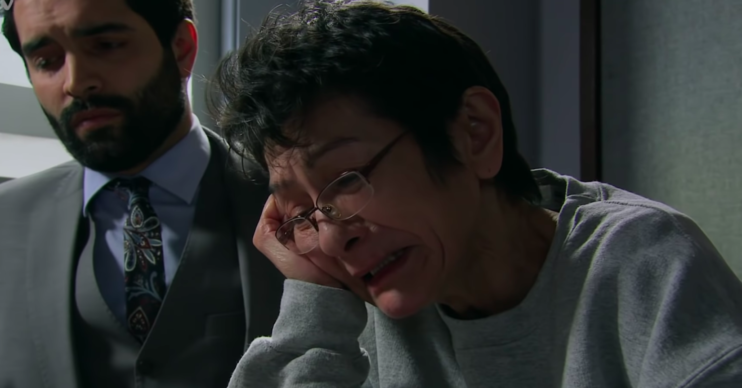 Yasmeen is in a world of trouble

Fans of Coronation Street are outraged after police charged Yasmeen with attempted murder.

The domestic abuse victim was pushed to breaking point by evil Geoff and defended herself by stabbing him with a bottle last week.

He survived and set about pretending to be the victim, leaving Yasmeen to her fate in the legal system.

But with his brainwashing being so deep, Yasmeen has been unable to break free and tell police what Geoff was doing to her.

Instead she admits her guilt and says that she is desperate to be back with Geoff to apologise.

And because of this Yasmeen has been charged with the serious crime and kept in jail.

It has left viewers furious and they flocked to Twitter to vent.

A second said: “#Geoff is making my bood boil and it breaks my heart Yasmeen wants to see him #coronationstreet #DomesticAbuse.”

A third said: “Sorry but cant watch this anymore #coronationstreet.”

Another wrote: “Charging her with attempted murder after the most pathetic police investigation known to man.”

When will Geoff get his comeuppance?

But any fans hoping the storyline will come to a close soon will be disappointed as soap boss Iain MacLeod has confirmed it will last until Christmas – at the earliest.

He said: “Typically abusers of this type do not get better so it would be dangerous to redeem Geoff.

“And God willing anyone as evil as Geoff could change, but most cases don’t see the perpetrator just changing the error of their ways.

“I would never want to give any real abusers in the world an opportunity to say ‘well look at Geoff, he can change his life around.’

“It would be a dangerous position to say that the abuser in the story is better when in most realities they aren’t.”

Iain added: “The timelines have been shunted due to the lockdown but I think it’s fair to imagine that it will be this year.

“What form that comeuppance is in is up for discussion.

“We wanted a redemptive ending for Yasmeen obviously and the toughest it’s going to get for her is over the next months.

“It’s towards the end of the year but the key thing is to impart the right message.

“For the sake of the people it has impacted we have to tell the right ending with some positivity.”

Can you keep watching this until the end of the year? Leave us a comment on our Facebook page @EntertainmentDailyFix and let us know what you think!