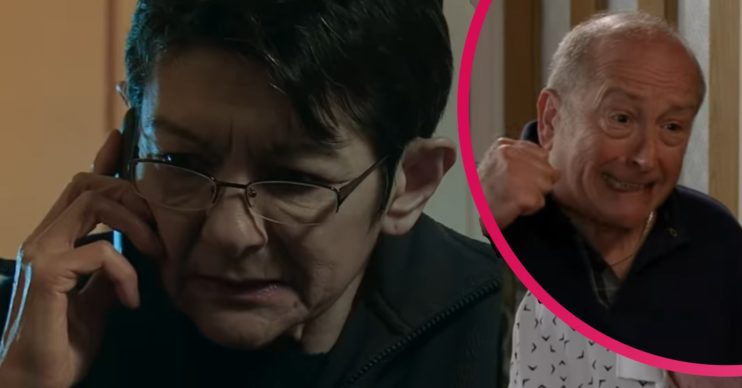 Coronation Street: Will Yasmeen be caught out over her illegal phone?

Coronation Street saw Yasmeen use an illegal phone to finally fight back against abusive Geoff last night, but will she come to regret it?

Fans were thrilled as the controlled wife told Geoff she would never be with him again.

However, some are worried Yasmeen has shot herself in the foot by using the phone, especially as Geoff brought up the fact it isn’t allowed in prison.

Why did Yasmeen phone Geoff on Coronation Street?

Yas called Geoff to tell him all about the “illuminating” visitor she’d had and Geoff joked it must have been a travelling torch salesman.

“You always think you’re so funny don’t you?” she burst out. “When in reality, you’re as funny as a car crash.”

She went on to saythe visitor was a woman who claimed he’d also controlled and abused her. Geoff demanded to know who the woman was.

“You can’t just bandy those accusations around,” he said. “On an illegal phone I might add, without telling me who you’re actually talking about.”

Why are viewers worried about Yasmeen?

It was the throwaway line about the phone being illegal that got viewers concerned.

Get rid of that bloody phone though love #Corrie

Yasmeen cut off the phone! 😩 Why do people always spill their tea? Now he’ll be a step ahead, again. #Corrie

What else happpened between Geoff and Yasmeen during the phone call?

Yasmeen accused him of lying about his exes who he claimed bullied him and he tried to twist things and confuse Yasmeen, calling her stupid.

She said: “You manipulated me and I fell for it, I shan’t again.

“I will never, ever go back to you again, and even if I’m found guilty it will be a good result because I shan’t ever have to go to bed with you. And if I’m not guilty then the same.”

Knowing he had lost control, Geoff turned really nasty and spat down the phone: “If that’s the way you want to play it, your choice, bitch.”

“How charming,” Yasmeen replied, seemingly powerful for the first time in their relationship.

Geoff then threatened her to “get used to the view from your window because you’re going to be in that prison for a very, very long time.”

Elaine agrees to give evidence to help Yasmeen in court, which leaves Alya relieved.

But Geoff convinces Tim Elaine is lying and she’s mad.

Elaine starts to get cold feet, but can Alya convince her to stick around and save Yasmeen in court?