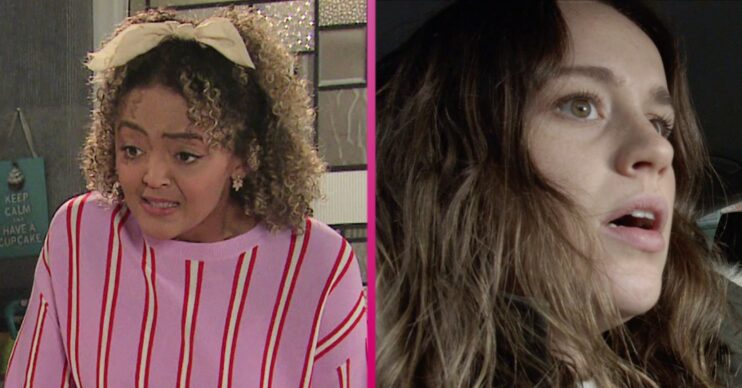 Coronation Street: Will Emma and Faye go to prison after police are suspicious of Ted’s death?

Could Emma and Faye be in trouble?

Coronation Street characters Emma and Faye were recently involved in a car accident which saw them run over an old man named Ted, but Ted died shortly afterwards. Could they be facing prison?

In Monday’s episode (January 3) the two girls were returning home from a party with learner driver Faye behind the wheel and Emma supervising. However Emma was still drunk from the party.

As they drove down a street, Ted walked out in front of the car after dropping his shopping and Faye knocked him over.

He appeared to be okay but he already had a broken leg. Ted assured the girls he was fine and just had a small knock to the head.

He refused to go to the hospital but accepted a lift home from Faye and Emma.

Emma wanted to go and check on him and they later paid him a visit but were horrified to find him dead.

Emma wanted to get help, but Faye feared she would go back to prison and begged her to cover their connection to Ted.

The two girls cleaned up any forensic evidence in the flat and left Ted, hoping he would be found by a family member.

However in tonight’s episode (Tuesday, January 4) Emma struggled with the guilt and anonymously called the non-emergency number pretending to Ted’s neighbour, saying she was concerned she hadn’t seen him for a few days.

Later Craig revealed in front of Emma and Faye he’d been called to a flat where an old man had been found dead.

He explained police were treating his death as suspicious as he had a bruise down one side of his body.

Craig then revealed the police were given an anonymous tip off, leaving Faye suspicious of Emma.

Later Faye confronted Emma and said if the police caught her on CCTV making the call to the police, she was on her own.

Could Emma go to prison? What’s next for her and Faye?

It has not been revealed if Emma and Faye will get caught out for what happened.

Later this week, Craig reveals to Faye that he’s arranged for them to move into the salon flat with Tyrone and Emma.

Faye does her best to hide her unease.

Meanwhile Emma heads home to find Craig and Faye on the doorstep with their bags. She’s not happy to find out they’re moving in.

Next week, Craig returns home from a run with a twisted ankle. Faye is horrified when Tyrone lends him Ted’s crutch.

As Faye helps Craig into the flat, Emma is horrified to see he’s using Ted’s crutch.

As Craig studies the initials on the crutch, Emma and Faye share worried looks. Will Craig figure out the truth?

Could Emma and Faye be facing prison if they’re caught?