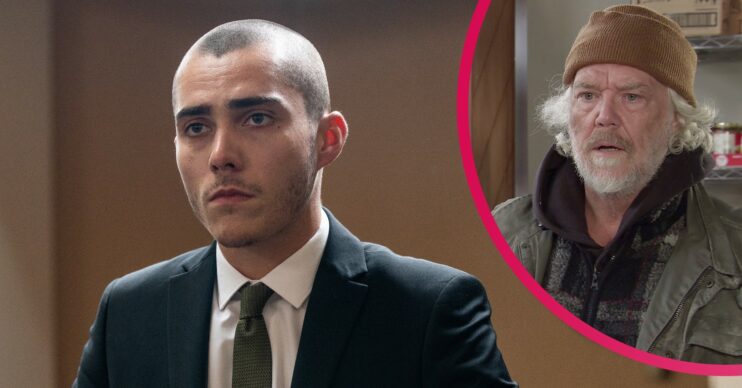 Coronation Street: Will Corey go to prison after Stu tricks him?

Coronation Street character Corey has been trying to avoid prison, but could he be heading there after Stu tricked him?

Earlier this year, Corey murdered Seb Franklin. However he was found not guilty. Instead Kelly Neelan, who tried to stop Corey killing Seb, was found guilty and sent to prison.

The one piece of evidence that could potentially prove Corey was Seb’s killer was the clothes he was wearing on the night of the attack.

But after the attack Corey threw his blood stained clothes and his Weatherfield Count backpack in the river.

Earlier this week, Asha spotted a homeless man with the Weatherfield County backpack and went after him.

She lost him as he ran off, but told Nina she was sure it was Corey’s.

They tried to track Stu down. Meanwhile Stu told Corey he could have the backpack back in exchange for money.

In tonight’s episode (Friday, October 29) Nina and Asha managed to find Stu and Nina told him how Corey killed her boyfriend.

However Stu didn’t want to get involved and hurried away.

Later he went to meet Corey to exchange money for the backpack. Corey gave Stu the money and Corey got the backpack, but was worried to see his blood stained clothes weren’t in there.

Stu went and gave the clothes to Nina and Asha, wanting them to take them to the police.

Meanwhile Corey panicked and told his father the clothes weren’t there.

Nina and Asha took the clothes to the police and they told them to keep it quiet about handing in Corey’s clothes in case he fled.

But will Corey go to prison?

Coronation Street: Will Corey go to prison after Stu tricks him?

In next week’s scenes Kevin and Jack wait at the wedding venue. Suddenly they’re interrupted by Nina, who reveals he’s had a call from DS Swain.

They’re reopening the case and going to arrest Corey.

In the back of the van, Stefan explains his plan to Corey. He says they will leave the country so he can start a new life with a foreign club.

Corey is pathetically grateful, but suddenly the van comes to a halt.

Will Corey get away or is it all over for him?