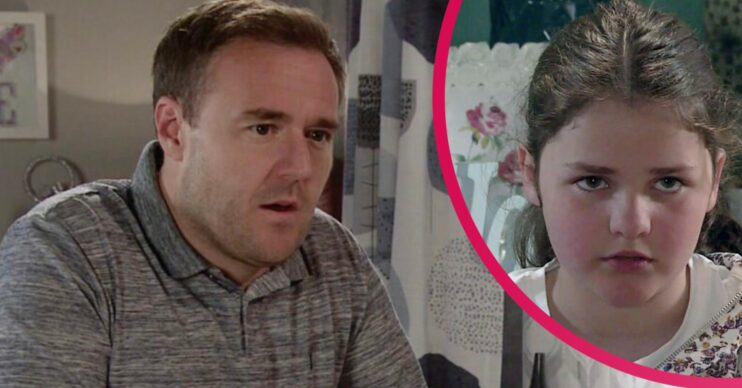 Coronation Street: Why hasn’t Tyrone decorated his flat after the fire?

The blaze started by Hope was months ago

Coronation Street fans have been left confused as to why Tyrone Dobbs hasn’t repaired the smoke damage to his flat.

A fire started by Hope Stape in August left smoke stains on the wall of the kitchen, which are still visible in scenes filmed in the flat.

Last night (Monday, December 6) Emma and Curtis, who live in the flat with Tyrone, were discussing his intentions to do the Three Peaks challenge. But those watching at home were more interested in what was happening behind them in the scene.

Where is the smoke damage in Tyrone’s flat?

The kitchen walls are still tinged with grey.

In the scene last night, Emma and Curtis had done an interview about his condition with his support group leader in the flat they share with Tyrone.

Emma was sitting on the sofa with Curtis resting on its arm as they laughed and joked about his soppy description of their relationship.

But right in view behind them was the kitchen wall, which is smoke damaged from the fire that happened four months ago.

Coronation Street: Who started the fire at the flat and when did it happen?

When Tyrone left Fiz Stape for Alina Pop earlier this year, their daughters, Hope and Ruby, were upset about it.

But with Hope’s past behavioural issues and habit of starting fires, she took her tantrums up a notch.

Letting herself into the flat in August this year, Hope spotted a burning candle and a bottle of nail polish and set the place alight.

Pregnant Alina was sleeping in the bedroom at the time. She was saved after Sally and Eileen called the fire brigade. However, Alina sadly lost her baby.

Tyrone reported Hope to the police and she was given a Youth Rehabilitation Order and must attend sessions with a therapist.

But the damage to Alina and Tyrone’s relationship was irreparable and she left him, and the Street, in September.

What are fans saying about the smoke damage?

Viewers are pretty confused that nothing has been done to repair the fire damage that happened over four months ago.

One was especially cross because Tyrone has children to stay in that flat. And surely it wouldn’t be good for Curtis’s supposed heart condition (even though that’s factitious)?

The smell alone would get on most people’s nerves!

How have Emma and Curtis not re-decorated the flat yet? How they can live with those blackened smokey walls I do not know 😂 #corrie

#Corrie @itvcorrie when are you going to decorate the fire damaged flat ???

Why has Tyrone not fixed up his fire damaged flat? He brings his children to stay there! #Corrie

Seriously are they going to sort those smoke stains out in that flat!! 🤦🏼‍♀️ #Corrie

FFS the fire in this flat was months ago why have they not cleaned up/redecorated????!!!! 😟🤷‍♀️🤷‍♀️🤦‍♀️🙄#Corrie pic.twitter.com/8jEWPgYz8w

Why is Emma still sitting in a fire damaged flat? Is it never going to be sorted?? #Corrie