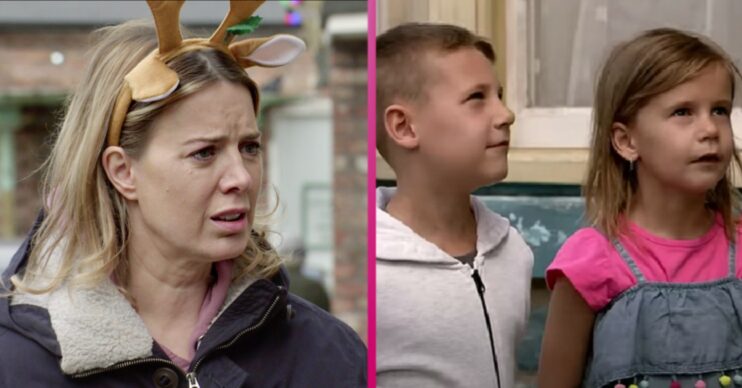 Coronation Street: Who are Charlie and Lexi? Who do Abi’s twins live with?

Coronation Street characters Charlie and Lexi Boulter returned to the soap tonight, but who are they?

In tonight’s scenes (Friday, December 24) Abi was worried about the Christmas turkey realising it wouldn’t be ready in time.

As she spoke to her husband Kevin, there was a knock on the door. Although Abi said she didn’t want to see anyone, Kevin soon walked in with Abi’s twins Charlie and Lexi.

She burst into tears as she hugged her kids.

Later their adoptive dad Damon turned up to pick them up and said Abi could spend time with them on Christmas Day too.

Kevin then revealed that Seb had started to plan the twins visiting Abi at Christmas back when he was alive.

But what do we know about Charlie and Lexi?

Coronation Street: Who are Charlie and Lexi?

Charlie and Lexi are Abi’s son and daughter. Their biological father is a man named Darren.

Charlie and Lexi are the younger half-siblings of Seb Franklin, who died in May of this year.

Read more: Lucy Fallon hits back at claims she’s ‘split from boyfriend and on dating app’

In 2017 the twins were taken into care and fostered by the Boulter family, who eventually adopted them.

They currently live in Australia with their adoptive father Damon and adoptive mother Mrs Boulter.

The twins are played by real-life twins Jacob and Jasmine Fish.

Why were they taken into care?

Abi first appeared in 2017 as Seb Franklin’s mother. She struggled with drug addiction and it was left to Seb to look after his younger siblings.

Anna Windass found out what was going on at Seb’s home and tried to help.

Eventually social services became involved and Seb blamed Anna for alerting them, but it was Sally Metcalfe who alerted them.

Abi did get clean and tried to get custody of her children, however things didn’t quite go to plan.

Even Seb tried applying for special guardianship of his siblings, but due to his age he needed sponsorship of someone over 21.

He went to Eileen but she refused, thinking the twins would be better off with the Boulter family.

The twins were eventually adopted but last year, Abi’s boyfriend (now husband) Kevin went to a call out and met Damon Boulter.

He discovered they were moving to Australia and told Abi the news.

Seb was devastated to hear his siblings were moving away and after some thinking, Abi decided to say goodbye.

When it came to saying goodbye she couldn’t go through with it, so she left before seeing them.

However she regretted it and arranged to say goodbye properly, but she got into an accident at the garage and missed them.

Will Abi try to get her twins back?

There is no evidence to suggest Abi will try to get her twins back and it’s clear they’re settled with their adoptive family.

While it’s clear Abi has missed her children, it looks like she could have other things on her mind in 2022.

Spoilers for upcoming scenes do reveal that Abi thinks she could be pregnant, but as she had a one-night-stand with Imran, she’s unsure if him or her husband Kevin could be the dad.

Although the twins went to live in Australia, Abi and Seb started to get their relationship back on track.

She was due to marry Kevin Webster back in May, however Seb and his girlfriend Nina were attacked.

Recently Abi and Kevin got married and she became a stepmother to his son, Jack, who loves her.

Last month Abi showed Jack a letter and revealed she wanted to adopt him. Jack agreed and even asked if he could call her mum, leaving Abi touched.