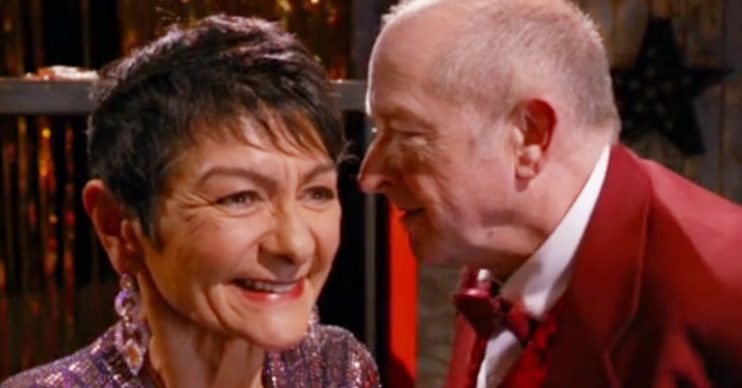 Coronation Street: When did the Geoff and Yasmeen relationship turn ugly?

Will evil Geoff get his just desserts?

Geoff and Yasmeen are central to Coronation Street this evening as there’s a terrifying rooftop showdown which should draw a line under them once and for all but how did their relationship begin?

It’s hard to imagine now how Yasmeen ever came to love the monster we all know him to be now, but Geoff was very charming to begin with.

It was only once he’d snared her that Geoff began to reveal his true colours.

How did the Geoff and Yasmeen relationship begin?

Geoff Metclafe first appeared in Weatherfield in March 2018, visiting his son Tim. A minor local celebrity due to his hospital radio show, he presented himself as devil-may-care cheeky chap.

When he began taking an interest in Yasmeen, it appeared a strange pairing, given how intelligent and classy she is in comparison to his loveable oaf routine.

But love blossomed and, before viewers had really got their heads round the romance, Geoff had put a ring on it!

It wasn’t too long after they wed that, looking back, Geoff’s controlling behaviour began – albeit dressed up as care and concern.

He gradually ramped up though, hiding cameras around the house so he could secretly watch his wife when she was alone.

Geoff also put a wedge in her friendship with Cathy and convinced his wife she had a drinking problem – so Yasmeen gave up alcohol.

He staged a burglary so Yasmeen would become more reliant upon him and stop going out.

Yasmeen’s granddaughter Alya spotted there was something ‘off’ about Geoff, when he tried to stop Yasmeen from going to her grandson Zeedan’s wedding in Spain.

When Yasmeen discovered what he’d done, Geoff faked a heart attack and pleaded with his wife, blaming his ways on how he was treated by his ex-wife.

Alya then noticed that he had been taking money out of the business, Speed Daal, to pay for Tim and Sally’s wedding, without Yasmeen’s knowledge.

Other horrors included him locking Yasmeen in a coffin-like box, claiming he wanted to practise a magic trick – then going out, knowing she is claustrophobic.

And – the very worst – Geoff made her a roast dinner, watched her eat it all and then revealed he had killed her pet chicken Charlotte Bronte for the meal.

Finally, she accepted that her husband was subjecting her to abuse and went to the police, unbeknown to her husband.

Geoff’s humiliation was now in full throttle though and Yasmeen was pushed right to the edge when he forced her to go to the Rovers in a vampy dress that was two sizes too big.

She was upset to discover that he had given Sally and Tim money and he dragged her home to avoid a scene.

Geoff then locked her in the house while he went to buy fish and chips.

He only brought enough for himself home and started ranting at his petrified and his starving wife as he carved bread – chucking chips at her as she cowered on the floor.

Suddenly he was in her face shouting abuse and, fearing for her life, she stuck him in the neck with a broken bottle.

At first, Geoff played the victim and everyone assumed Yasmeen had attacked him without provocation.

But more and more people began to get wise to what was happening – even his son Tim was prepared to be a witness for the defence at Yasmeen’s trial for attempted murder.

Justice prevailed and Yasmeen was found not guilty. Geoff’s not going quietly though and, one way or another, the denouement to this dreadfully sad story will be equally shocking…