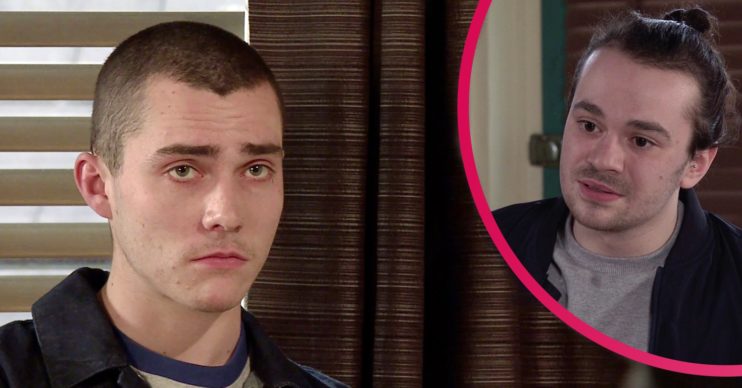 Coronation Street: What happens next for Corey as new evidence is found

Corey and his friends attacked Seb

Coronation Street character Corey was caught out as new evidence came to light about Seb and Nina’s attack. But will he go to prison?

Last month Nina and her boyfriend Seb were attacked by Corey Brent, Kelly Neelan and their friends.

Seb later died from his injuries and Kelly and Corey’s other friends have since been arrested and charged.

However as Corey offered up evidence and claimed he tried to stop Kelly attacking Seb, he was not charged.

Over the last few weeks, Corey’s on and off girlfriend Asha has been pretending to believe Corey to get evidence of his involvement in the attack.

In tonight’s episode of the ITV soap (Friday, June 4) Corey woke up and discovered Asha was going through his phone.

A short time later Abi and Nina turned up, worried that Corey may have hurt Asha.

A disorientated Corey tried to make an escape and ran out of the flat. However he ended up falling down the stairs in Victoria Court.

Asha wanted to call an ambulance, but Nina wanted to leave Corey as revenge for what he did Seb.

However Abi made the decision to call an ambulance.

After Corey was taken away by the paramedics, Asha revealed she still had his phone.

Coronation Street: Corey to go to prison as new evidence is found?

After going on a health app, she realised it had been tracking Corey’s movements.

The app revealed that a few nights after the attack, Corey went for a walk by the canal at 3am.

Asha took the phone to the police and showed DS Swain Corey’s movements.

Later DS Swain went to see Corey. She revealed that CCTV picked up Corey walking down Orphanage Lane, which comes to a dead end behind the biscuit factory, two days after the attack.

Corey explained he went walking in the middle of the night to clear his head.

Although Corey claimed he hadn’t been there before, the officer explained that they reviewed the footage from the night of the attack and saw Corey on CCTV once again.

On the footage Corey was wearing a tracksuit and carrying a rucksack. However when he came out of the ginnel, that is Orphanage Lane, he was wearing jeans and a hoodie and had no rucksack.

DS Swain revealed the health app tracked him walking by the river and asked Corey if he threw the rucksack into the river.

She explained divers were searching the river. She asked Corey if he was wearing the tracksuit when he attacked Seb and Corey said he was, but he didn’t attack anyone.

He said he tried to help Seb but got rid of the tracksuit in case it had his blood on it.

What happens next for Corey?

Whilst it hasn’t been revealed what will happen to Corey, it’s certainly not looking good for him.

If his rucksack with the clothes are found, he could be facing charges.