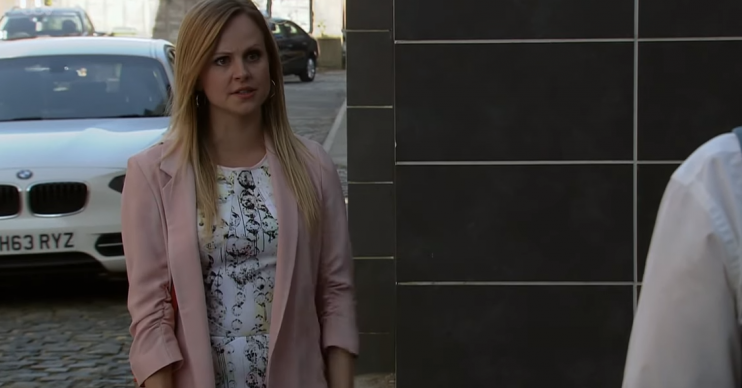 Callum was killed in 2015 by Sarah's sister-in-law Kylie

Viewers of ITV’s Coronation Street have slammed Sarah for vowing to punish her brother Nick for his crimes when she helped her sister-in-law Kylie and brother David cover up her boyfriend Callum’s murder.

Despite telling David he would tell the truth that he was the one behind it, Nick changed his mind again and decided to throw David under the bus, telling the court his brother was the mastermind behind the theft.

Nick told the courts that his brain injury, which he got in a crash in 2013, made decision making difficult and he went along with David’s plan.

Eventually Nick realised he couldn’t see his brother sent down for a crime that he didn’t commit and admitted the truth – he took Audrey’s money and David didn’t find out until later on.

But with David serving a suspended sentence for attacking Gary Windass last year, the judge had no choice but to send him to prison – while letting Nick go free.

Sarah was furious that David had gone to prison whilst Nick went unpunished.

Sarah told Nick that she was having him removed from his ownership of Underworld.

She had her boyfriend, solicitor Adam Barlow, draw up papers declaring Nick unfit to work as director of the company.

Sarah used the psychiatric report, which was accepted by the judge in the court case, saying Nick was unfit as he was suffering from the effects of a brain injury, making him unable to make big decisions.

After Nick realised his sister had taken his excuse for his crimes and used it against him hr asked why she was doing this and Sarah replied with: “Because you need to be punished for what you did and if a judge won’t do it, I will.”

Viewers didn’t understand how Sarah felt she could punish Nick for theft when she had helped cover up a murder.

What about Callum, Sarah? Do you not need a spot of punishing, too? #Corrie

Amazes me, Sarah gets away with murder and she's having a go at Nick !!! #potkettle #Corrie 😡

Sarah remember what you did, yeah me too #Corrie

Back in 2015, Callum was under pressure to pay off a large debt to a drug dealer named Denton and tried to get the money off the Platts in return for giving up his rights to Max, who he shared with David’s wife Kylie.

Sarah tried to record Callum talking about his crimes but when he found the device he began to attack Sarah and had her on the floor.

She was eventually saved when Kylie came up behind him and hit him on the head with a wrench, killing him.

They were forced to dump Callum’s body in a manhole in the garage, which was being converted into an annex for Gail.

The body remained hidden for a while, although all of them struggled with the guilt, especially Sarah, who eventually found out she was pregnant and gave birth to Callum’s son.

The body was discovered when Tyrone crashed his pick-up truck through the annex, cracking the concrete.

The Platt’s allowed Jason Grimshaw’s father Tony, who had recently died, to be blamed for the death after his DNA was discovered on the wrench.