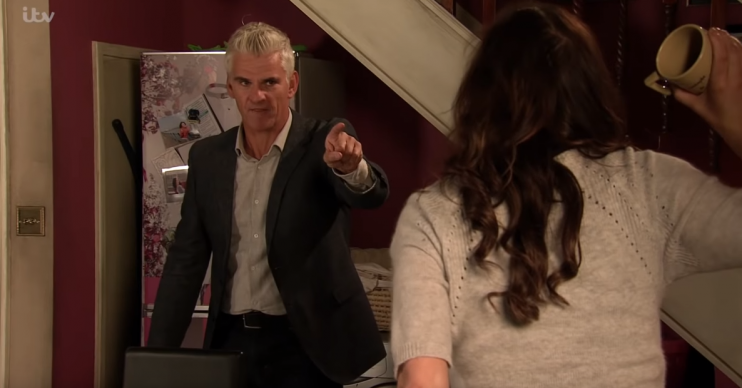 Robert went round to see Vicky and an argument quickly started

Viewers of Coronation Street were left shocked as Robert Preston appeared to kill Vicky Jefferies, who is pregnant with his child.

Fans of the show know Robert was leading a double life for months being engaged to both Michelle Connor and Vicky.

But Michelle soon learnt what Robert had been up to when she saw him and Vicky arguing after following him to Vicky’s home in Macclesfield.

She soon confronted Robert who lied once again, telling her he and Vicky had a one-night stand when they had originally split.

Michelle then confronted Vicky who told her the truth – that Robert had also proposed to her.

Although the businesswoman has told Robert she believes him, viewers know she is secretly plotting revenge, planning to take every penny Robert has.

Some viewers even think Michelle and Vicky are working together, but it looks like the storyline may have taken a dark twist as Robert appeared to kill Vicky.

In last night’s episode of the soap (December 2 2019), Michelle told Robert she was afraid Vicky would turn up to their upcoming wedding and ruin their big day.

To ensure Vicky didn’t sabotage their nuptials, Robert went around to her house to tell her to keep away.

Did Robert kill her?

A row soon ensued between the pair and it quickly became violent with Vicky throwing mugs at her now ex.

Vicky’s neighbour came round to complain about the noise but before she could even knock on the door there was another crash and Vicky could be heard screaming before it went quiet.

Viewers were shocked as it appeared Robert killed the mother of his unborn child.

Did Robert kill her? Wtf? #Corrie