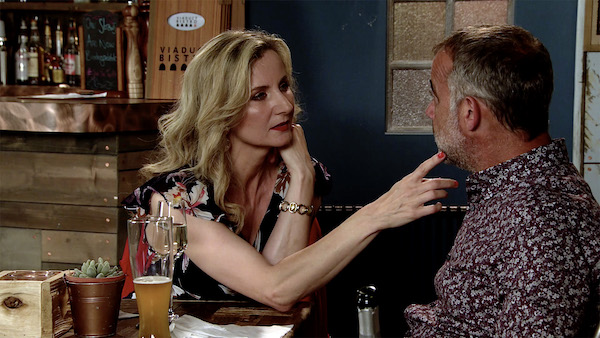 Did you call it?

Kevin Webster met his match on Coronation Street last night, when he had a rather unfortunate date with tattooed man-eater Martine Skelton…

On Wednesday (October 9), Kev finally met up with online match Martine a week after she’d stood him up!

And while viewers watched the date turn into a car crash, some were puzzling over where they recognised the single lady from…

Unfortunately for Kevin, it became obvious that the fifty-something singleton was only after his cash.

So it looks like Martine won’t be called for a second date any time soon!

Fans of the ITV soap recognised actress Corrinne Wicks from her previous roles in two soaps – Doctors and Emmerdale.

Corrinne, 51, is perhaps best known for her role as Helen Thompson in BBC1 daytime drama Doctors.

Her first husband Phil was killed in a car crash while she was cheating on him with colleague Marc Elliot, and her engagement to fellow doctor Jack Ford was cut tragically short when he was murdered by a vengeful ex…

Corrinne also starred as Ella Hart in Emmerdale between 2010 and 2011.

Her Dales alter ego was the ex-wife of Declan Macey and her biggest storyline was her affair with daughter Mia’s boyfriend, Adam Barton.

She left, moving to Singapore, after the affair was exposed and she realised her daughter would never forgive her.

Mia died in a car accident in 2011 and Ella returned for the funeral, which was held off-screen.

It was very clear she wasn’t coping with her daughter’s death and she left again, with Declan’s sister Megan Macey later revealing Ella was engaged to someone else.

Corrinne has also popped up in Doc Martin, Holby City and Grange Hill.

Had such a lovely time shooting my episodes of Coronation Street. Tune in tonight (Weds 9th 19.30 & 20.30) to see Martine strut her tattooed, Northern stuff. Many thanks to the lovely peeps at @itvcorrie pic.twitter.com/N037LLt0v4

After appearing on Corrie, the actress tweeted: “Had such a lovely time shooting my episodes of Coronation Street. Tune in tonight (Weds 9th 19.30 & 20.30) to see Martine strut her tattooed, Northern stuff. Many thanks to the lovely peeps at @itvcorrie.”

She also confirmed her tattoo was seemingly real!

Did you recognise Kev’s date? Leave us a comment on our Facebook page @EntertainmentDailyFix and let us know what you think!