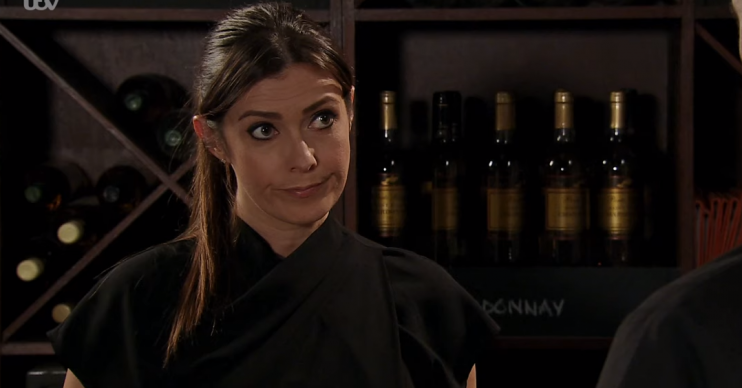 Robert is engaged to Michelle and Vicky!

In Wednesday night’s episodes (August 28 2019) Robert was struggling to keep up with his lies when Jed turned up at the Bistro.

Jed discovered Robert had two engagement rings and enjoyed putting him on edge.

Vicky’s ex came into the Bistro and introduced himself to Michelle as someone who works with Robert in the young offender unit.

However, Jed was there to try and get some cash out of Robert and told him he would tell Michelle the truth about Vicky and the baby if Robert didn’t give him five grand.

Not having the money, Robert managed to make a deal with Jed saying he could give him £2000 for Michelle’s ring back and Jed accepted – as long as Robert convinced Tyler to go back to Ireland with Jed.

Of course Michelle was left confused by the missing £2000 from the Bistro safe.

Robert ended up dropping himself in it telling Michelle he bought her another ring, but then telling Craig that he had acutally found the original ring.

Later, Michelle and Craig ended up discussing the ring and Michelle started to become suspicious as to why Robert told them completely different stories.

Viewers were left questioning how ‘thick’ Michelle hasn’t figured out Robert is leading a double life.

#Corrie Michelle is so thick she still can't see something is wrong??

Michelle isn’t that thick is she surely? #corrie

Michelle must be rather dim, not to of sussed Robert by now!!! #Corrie

Surely Michelle can smell a rat by now 😟🐀🐀#Corrie

Viewers know that Robert is currently engaged to both Michelle and Vicky.

To keep up the lies, Robert told Michelle he had a new job working in the kitchens of a young offenders and told Vicky he didn’t want to announce her pregnancy because it may upset Michelle.

Michelle and Robert originally split up because he wanted children and she didn’t want anymore after the loss of her son Rauri.

In order to stop Vicky from leaving to go live in Ireland with Jed, he proposed to her with Michelle’s ring.

He had another ring made and told Vicky that the one he proposed with was a fake stand-in whilst her real one (which was actually fake) was being made.

Jed discovered Robert had two rings and stole the real one, which was Michelle’s.