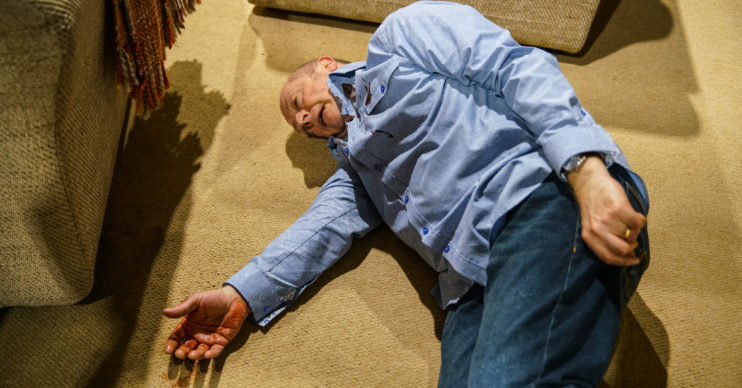 They want him to face justice!

Coronation Street fans are praying evil abuser Geoff Metcalfe survives being stabbed in the neck – so he can face justice for his disgusting crimes.

Grabbing a knife, he added: “Maybe I should kill you – do the world a favour. Would anyone really notice if you were gone?”

In her haze and hearing nothing but abuse and threats, Yasmeen grasped for a wine bottle.

She hit him over the head once and then when he didn’t go down, she lashed out with the broken bottle and stabbed him in the neck.

He fell to the floor bleeding and clutching the wound as Yasmeen looked on horrified.

But while Geoff looks to be in a bad way, fans are surprisingly desperate for him to recover – so he can face justice for the hell he has put Yasmeen through.

One said: “I really don’t want Geoff to be dead… only so he can face the appropriate justice. The good thing is the whole thing might have been recorded on Geoff’s camera he has hidden #CoronationStreet #Corrie”

A second said: “#Corrie I’ll say this, if they kill Geoff off, then that will be a terrible mistake and it will ruin the storyline.

“Because that is not true justice and is the wrong conclusion towards an issue based storyline. You want to encourage victims to go to the police about their abuser.”

A third said: “Just caught it on catch up. As a survivor too, I’m hoping and praying that Geoff hasn’t been given the easy way out. A court case and a hefty sentence please. Not another Phelan type no justice ending.”