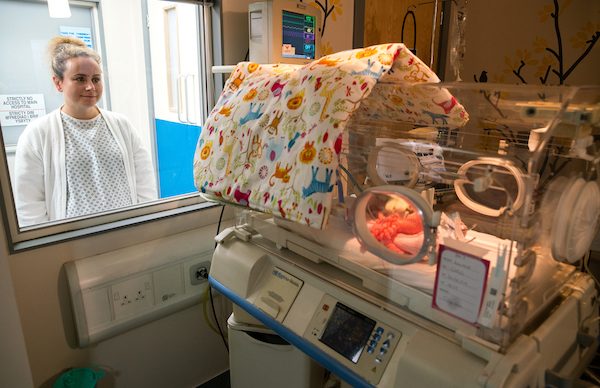 Gemma and Chesney had two boys and two girls

Viewers of Coronation Street were divided as Gemma Winter safely gave birth to her four babies.

In tonight’s episode of the ITV soap (October 30 2019) Gemma went into labour on a cable car in Llandudno.

Despite panicking that her first baby would die, she ended up giving birth to her son in mid air with the help of Ches – and he was fine.

Eventually her and Ches got down to the cable car station where an ambulance was waiting for them.

On the way to the hospital, things weren’t look great and the paramedics had to try to help slow down labour so Gemma could go straight into surgery at hospital to deliver her other three children.

As Gemma got to the hospital, she immediately went into theatre and luckily all three babies were born safely.

Ches later announced they had two boys and two girls and Gemma told their family they named their children Bryn, Cleo, Carys and Aled.

Viewers were overjoyed that all four of their babies were delivered safely.

#corrie #coronationstreet A HAPPY STORYLINE! SO HAPPY FOR GEMMA AND CHES ❤

Hilarious, #Corrie #Gemma
Chesney & Gemma in the cable car.
“Can you see anything?” Asks the paramedic over the phone.
Chesney “I can see Llandudno and the little cafe where we had our lunch.”
“No, I mean can you see the baby’s head?” Asks paramedic.
Brilliant! LoL!

Absolutely loved Gemma and Chesney this evening. Funny, emotional and so well acted, just as Corrie should be. Loving that Bernie came up trumps and the Welsh names too #quads

However, others weren’t so impressed with how things progressed, with some calling it “unrealistic.”

Others suggested there was no way Gemma would be up and about so soon after such major surgery.

That was so unrealistic. #Corrie #Gemma

Huge Corrie fan, but have to say really dissapointed in Gemma & Chesney storyline tonight………as if??

Love Gemma & Ches but.. Corrie- Gemma wouldn’t be wandering about after surgery! Should’ve put her in a wheelchair! How did none of the writers not think that? #corrie

As if Gemma would be up and walking about so quickly after an emergency section & having 4 babies. ‍♀️ I couldn’t feel legs for hours #corrie

hold up…. Gemma’s just had a c-section and she’s already up and walking around? @itvcorrie #Corrie pic.twitter.com/TeN8cTHQVo

Sam Aston and Dolly Rose Campbell appeared on Lorraine earlier today (October 30 2019) where they revealed that the quads were being played by five babies.

A couple of weeks ago, Gemma was told one of the babies was growing slightly slower than the other three, leading her to worry about her unborn child.