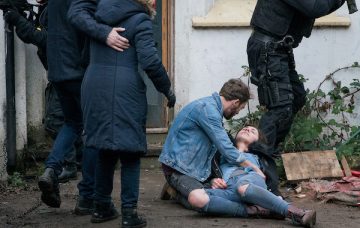 She stabbed her own son!

The teen escaped from prison last week and took his own mother hostage. He demanded a car and cash or he would kill her.

With the pair holed up while police waited outside, it looked like history was about to repeat itself when Shona rang David to say goodbye and told him she loved him and the children.

As Clayton hung up the phone he told David “game over” and Shona could be heard screaming. However, she managed to escape and make it out of the building.

When she saw all the armed police she ran back inside to protect her son, afraid he would be shot. But she soon staggered back out the building covered in blood.

At first David assumed it belonged to his girlfriend, but the paramedic revealed it wasn’t her blood.

Shona cried as she shouted out: “I stabbed my son!”

Viewers loved the twist in the plot!

Oh Shona stabbed her own son. Manslaughter or attempted murder charge for her #CoronationStreet #itv #shona

Shona was devastated over what happened and Clayton was rushed into emergency surgery.

The police didn’t arrest her although she could still face charges. She revealed even if Clayon didn’t pull through, she could claim it was self-defence.

Shona also revealed to David that Dane died because he was smuggling drugs into the prison for Clayton to sell and that he wasn’t bothered by his father’s death.

Clayton killed David’s wife Kylie back in 2016 after he stabbed her when she came to defend her friend Gemma.

He was found guilty of murder and sentenced to 15 years in prison.

What do you think of Lolly? Leave us a comment on our Facebook page @EntertainmentDailyFix and let us know what you think.