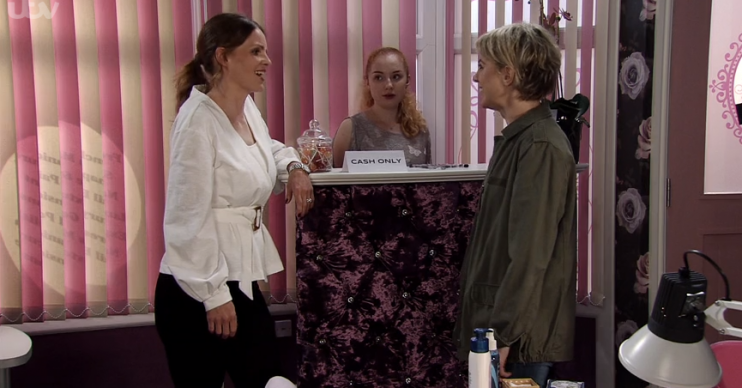 Abi put up her middle finger!

Viewers of Coronation Street viewers were left laughing as Abi Franklin subtly flipped the bird to salon owner Rachel, who has been involved in people trafficking.

The mechanic wanted to help her son Seb sneak into the salon so he could speak to Alina, who he believed was in danger after he rang her and got cut off suddenly.

Abi recently went into the salon to get her nails done with Sally Metcalfe and found it strange when Alina ignored her.

As Abi went back into the salon, Alina quickly went on a break looking nervous.

Abi told Rachel that the polish on one of her nails had lifted. In doing so, she raised her middle finger to show Rachel which nail.

Read More: Coronation Street SPOILER: Eileen fears for her life as the truth about Jan is revealed

In order to keep Rachel distracted she told her she would rather “the organ-grinder” fixed her nail for her instead of one of the girls.

Viewers laughed as Abi made the rude gesture at Rachel.

abi thought 🖕🏼 to it all #Corrie

Seb managed to sneak into the back room of the salon where he discovered Alina and was shocked when he found out she lived there.

Alina revealed she was in debt to Rachel and her husband Nikolai and wanted to work to pay it off and then send money home to her family.

Read More: Coronation Street SPOILER: Gary lines Ryan up as his next victim?

Seb promised to help Alina but he got a huge shock when he discovered his housemate Jan coming out of the salon.