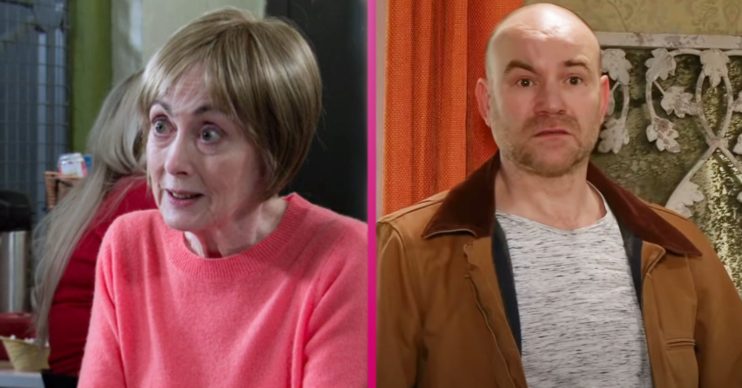 She revealed she had to leave her son with Geoff

Coronation Street viewers were left in tears as Elaine revealed she is Tim’s mother in last night’s episode (Monday, July 27).

Yasmeen woke up in hospital after her heart attack and Alya assured her she would be okay and her trial has been postponed.

Although the trial has been put off, it meant Alya and Imran have time to find Elaine, a former partner of Geoff’s who was also abused.

Back on the Street Ryan realised the woman he saw on the cobbles before was Elaine, as she appeared to hide from Geoff and Tim. Spotting her going into the tram station, Alya asked to speak to Elaine in the hopes she can help Yasmeen.

Although Elaine was scared to talk about her ex-partner, she ended up revealing her identity to Alya.

Coronation Street: Elaine explains her past with Geoff

Elaine told the Speed Daal owner that she and Geoff were married for two years. But when Alya said she thought Geoff’s first wife was named Philippa, she clarified that she is Phillipa but changed her name after the divorce.

When asking about her past, Elaine said that Geoff made her ‘hate herself for what he made her do’.

As Alya begged Elaine for help with Yasmeen, Elaine said: “It’s not just about him. It’s seeing him. Seeing Geoff here was hard enough but seeing him, grown up.”

As Alya explained she was confused by what Elaine meant, she carried on: “You asked me how I got out. I got out by giving up my boy. My son.”

She broke down in tears as she continued: “Oh not just giving him up, no, by leaving him with… By leaving my baby with him.”

Piecing things together, Alya realised she was referring to Tim, meaning Elaine is Tim’s mum.

Alya tried her best to get Elaine’s number, but a scared Elaine ran off apologising for not being able to help.

However fans were in floods of tears realising the only way she could escape abusive Geoff was to leave her son behind.

elaine is breaking my heart 🥺 #Corrie

But now that Alya knows the truth, will she be able to convince Elaine to help Yasmeen?