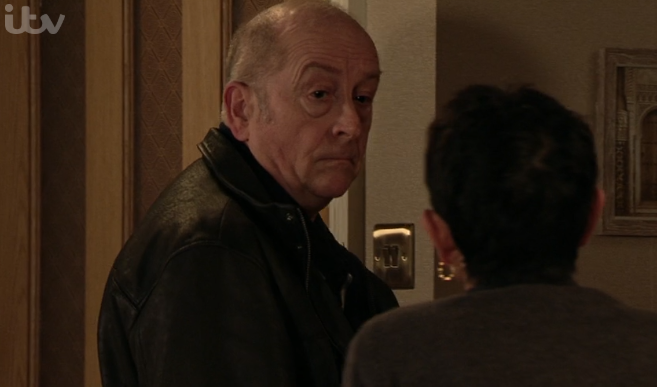 Viewers of Coronation Street were left disgusted after Geoff Metcalfe forced his wife Yasmeen Nazir to pretend her granddaughter Alya is dead.

Over the last several months, Geoff has been abusing Yasmeen in a coercive control storyline.

Not only has he been trying to separate her from her friends and family, but he has taken control of her money and has her cooking and cleaning for him constantly.

Alya has noticed Geoff’s behaviour and in last night’s episode (Monday, March 16) she tried to protect her gran from controlling Geoff.

After discovering Geoff and Yasmeen planned to sell their share of Speed Daal and move to Cyprus, Alya knew that it was part of Geoff’s plan to keep her away from Yasmeen.

After going round to Yasmeen’s, Alya tried to get her gran to pack a bag and leave Geoff.

However, Yasmeen told Geoff she didn’t want to leave him and Geoff kicked Alya out of the house.

Later, Geoff blamed his wife for Alya’s suspicions and ended up storming out.

You are a monster Geoff.

When he returned, Geoff grabbed a bag and said he should be the one to leave.

Yasmeen said she would try to make Alya see that she’s wrong and as Geoff went to get his stuff he said: “Don’t bother. We’re beyond that. She’s dead to me.”

In a desperate bid to make Geoff stay, Yasmeen said: “Me too.”

She continued: “If she can’t be happy when I’m happy, if she can’t trust me when I swear I’m telling the truth, I’m finished.”

Yasmeen said she would cut her ties with her granddaughter to keep Geoff.

Viewers were disgusted that Geoff’s manipulation had caused Yasmeen to cut off Alya.

😲🤯I can't believe Yasmeen has just agreed with Geoff that Alya is dead to her!
wtf is it going to take for Yasmeen to see that the way Geoff is treating her is wrong?
I hope Geoff has a history with the police as it may be the only way to get Yasmeen away from him!#Corrie

You are a monster Geoff #Corrie

Meanwhile, Alya refused to back down and went to the police to get information on Geoff and his past.

Is he about to get his comeuppance?