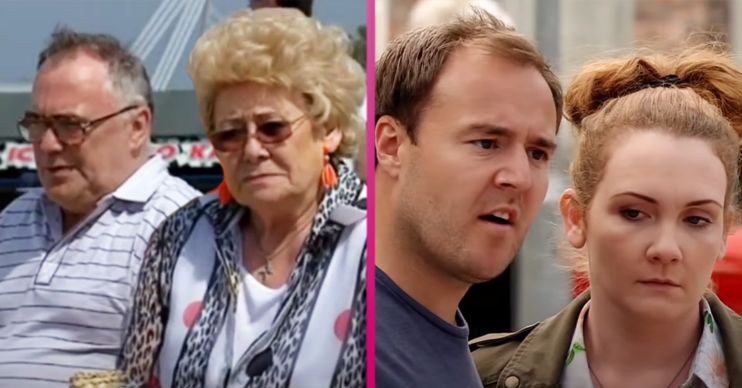 Jack and Vera have both died

Coronation Street viewers were left furious as soap couple Fiz and Tyrone were compared to Jack and Vera.

Last week, Fiz and Tyrone started to realise they weren’t able to spend as much time together.

In Monday’s episode (June 29) Fiz came home to find Tyrone sat on the sofa in a vest with a beer in his hand watching the TV.

Fiz immediately realised she and Tyrone were turning into Jack and Vera.

However viewers weren’t happy that they’ve been compared to such an iconic couple.

In a Digital Spy forum, one Corrie fan wrote: “What does everyone think? I think they are more like Martin and Gail than Jack and Vera personally.”

One replied saying: “I think it’s laugh about to compare those two drips to Jack and Vera.”

A second said: “Daft comparison. Tyrone needs to get away from horrible Fiz asap.”

Daft comparison. Tyrone needs to get away from horrible Fiz ASAP.

A third commented: “Not in a thousand years.”

Another added: “Ludicrous in my opinion. How the writers can think Fiz and Ty are comparable to the legends Jack and Vera is beyond me.”

What does Alan Halsall think about being compared to Jack and Vera?

Earlier today, Tyrone and Fix actors Alan Halsall and Jennie McAlpine appeared on This Morning to talk about being compared to the iconic couple.

When asked by Holly Willoughby if it’s the biggest compliment they could receive, Alan said: “Yes absolutely.

“The first thing I think about when I think of Coronation Street is Jack and Vera so I mean, I shy away from the comparisons because for me they’re on a pedestal up above us all, so it’s nice to be compared.”

Do you think Fiz and Tyrone are turning into Jack and Vera? Leave us a comment on our Facebook page @EntertainmentDailyFix and let us know what you think of this story.