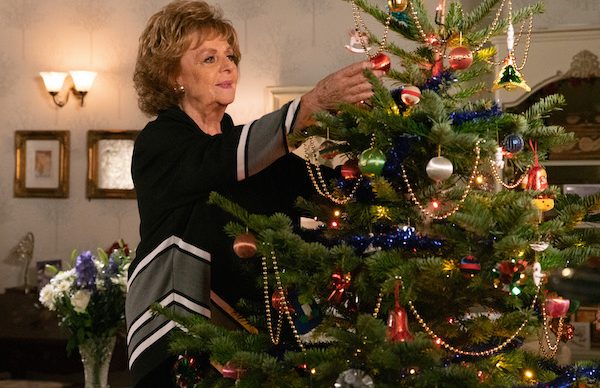 Viewers of Coronation Street are worried for Rita Tanner after her Christmas fell on her while she was alone at home.

Fans of the show know Rita has been struggling with loneliness this festive season.

Although she took the time off work to spend Christmas with her friend Emily Bishop in Scotland, Emily had to cancel due to an illness.

Rita tried to go back to work but her boss Brian told her he had hired Gail Platt to do shifts over the festive period.

With nothing to do and with her friends spending time with their families Rita has been left feeling left out.

In tonight’s episodes of the soap (December 23 2019) her friend Gemma Winter paid a visit and told Rita she was having a Christmas tree brought round for her and would be helping her decorate.

But with four new babies, Gemma had her hands full.

Seeing how busy Gemma was with her children, Rita didn’t want her to worry about not coming over and told Gemma she would be spending Christmas with her friend Mavis, when in reality her only company is Mrs Mcelroy’s cat

But after Dev helped her put up and decorate her Christmas tree, disaster struck when Rita tried to fix something on the tree and it came tumbling down onto her.

Although Gemma was going to take a Christmas present over to Rita, Chesney said she must have missed her as the lights in her flat were out.

Fans were worried no one would come to Rita’s aid as they believe she is away for the holidays.

Someone go save our Rita🙏🏾 @itvcorrie #Corrie

With Rita trapped and no one aware of what’s happened, will she manage to get out of her situation before Christmas Day?