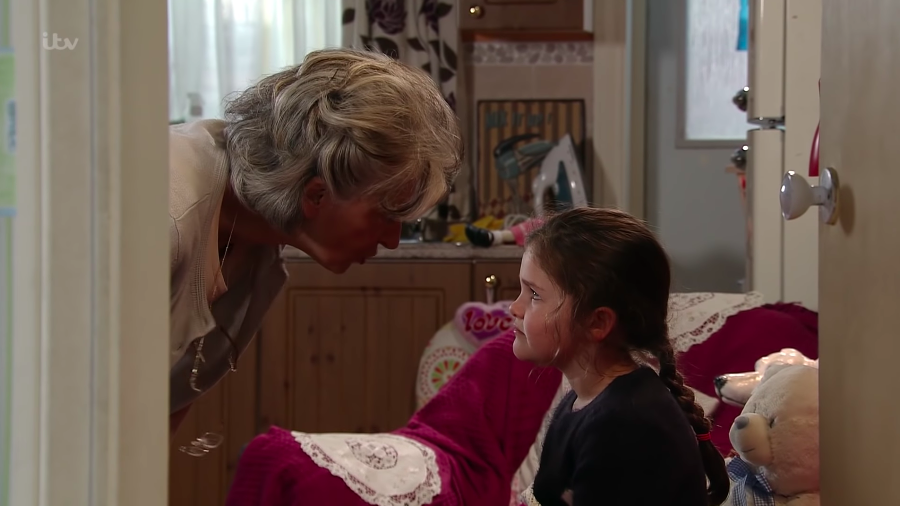 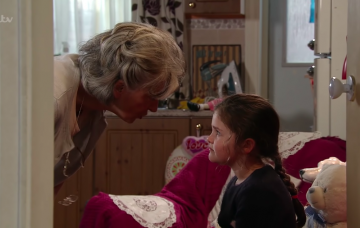 The scheming OAP has made it clear over the last few weeks how she hates young Hope over her troubling behaviour.

But after being convinced into babysitting for Hope after her school expulsion, Evelyn waited until they were alone to dish out some evil deeds to the child.

Pushing her against the wall and forcing her to keep her face up against it, Evelyn barked orders and insults at her.

“Keep your nose pressed up against the wall you wicked girl,” she told her before issuing a chilling threat.

She said: “You move one muscle I’ll come down on you so hard.”

Hope’s mum Fiz and step-father Tyrone were horrified when they came into the living room and witnessed Hope’s shocking ordeal.

Terrified Hope fled into her mum’s arms for safety while a furious Tyrone confronted his biological grandmother over her behaviour.

But Evelyn was unapologetic and defended her actions insisting Hope deserved to be punished for her behaviour.

The youngster, who has admittedly tried to kill her cousin on occasions, had knocked over Evelyn’s jigsaw puzzle and beheaded her sister Ruby’s favourite doll.

But for viewers there was no excuse for Evelyn’s behaviour and they were sickened by the “child abuse” they watched.

One said: “Would you seriously allow Evelyn to stay in the house when she’s abusing your child – what is wrong with these people? #corrie evelyn.”

“#corrie what a horrible woman Evelyn is,” someone else added.

A second wrote: “Evelyn is an evil old cow #corrie.”

” I can see Evelyn hitting Hope and nobody believes her 🤔 evil witch 🧙‍♀️ #Corrie #CoronationStreet,” a further user said.

Another commented: “Keep that nose against the wall Jesus Evelyn bit far, you old bat #Corrie”

What did you think of the scenes? Has the soap gone too far? Let us know what you think by leaving us a comment on our Facebook page @EntertainmentDailyFix!