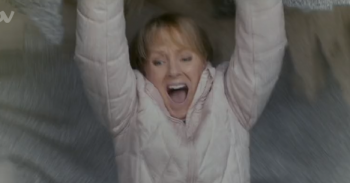 But some loved it

Coronation Street viewers were left underwhelmed by last night’s factory roof collapse especially as it had been so hyped.

Scenes aired in Monday night’s second episode saw Sally Metcalfe arguing with sister Gina Seddon on top of Underworld’s roof while they were staging a protest to save their jobs.

As Sally told Gina to leave her and her family and friends alone, Gina tearfully agreed, but their argument turned even more dramatic as Sally refused Gina’s help getting down and ended up falling through the unstable roof into the factory below.

And fans weren’t impressed by the stunt at all. Writing on a Digital Spy forum, someone began the thread by writing:

“Was that our lot?! We’ve had MacLeod build up hype around this and that was what we actually had on screen?!

“Appalling. Aside from the odd shot of dust falling ominously from the roof, there was absolutely no tension. Compare it with the tram crash and the brilliant edits we had of a whole host of stories about to be taken in a whole new direction right before the tram struck and there’s simply no comparison.

“Tonight it looked ridiculously cheap and we didn’t even have an aerial shot of the roof craving in, which was what I was hoping for.”

Someone else agreed: “This is why storylines and character driven [plots] should be put over stunts.”

“I agree,” added a third. “Although I believe there is more on Wednesday in terms of stunt and roof collapse. However if it’s as underwhelming as tonight, then it will be a complete waste of money.”

And a further comment said: “This is why I don’t care about stunts. I can’t remember one stunt on Corrie I ever felt was genuine or that I was emotionally invested in. They are meaningless.

“And CGI looks cheap most of the time. Cheap and fake. Even in big Hollywood productions.”

let’s be real tho corrie have hyped that up for months and it was the most underwhelming stunt ever. the tram didn’t crash for that

Soaps need to do better with their stunts…#Corrie

But some viewers were impressed with the whole thing, calling it a “brilliant episode” and “amazing”.

that was such a brilliant episode and it’s only the beginning!!! so excited to watch the rest play out. #corrie have always been my favourite when it’s come to stunts

How insane was that stunt wtf amazing #corrie

The huge stunt was announced by show boss Iain McLeod last year who told The Mirror:  “We’re knocking the factory down in a colossal stunt.

But it seems unless things improve on Wednesday night’s episode, the much-talked about stunt will be a disaster in more ways than one for the Street.

Coronation Street continues Wednesday at 7.30pm and 8.30pm on ITV.