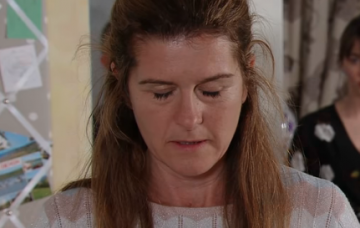 By far the favourite pick to be bumped off!

Soap fans have reacted to the news a Coronation Street regular will be killed off when the Underworld factory collapses by volunteering characters they’d like to see axed!

Several Weatherfield faves have been tipped to be in the running to be bumped off when the dramatic storyline unfolds in March of next year.

But while Entertainment Daily! readers on Facebook also put forward several potential candidates for the chop, there was one clear top choice to be written out of the ITV series.

A third commented: “Not Beth or Kirk, but should be Gina.”

And a fourth remarked: “Please let it be Sally’s sister Gina who dies. Useless character.”

Other polarising characters also found themselves on the ED! hit list – even if they don’t have much of a link to the knicker factory.

“Please let it be Tyrone’s nan or Gina or Mary’s daughter in law, I can’t stand any of them,” suggested one fan, who still included Gina in her picks.

Another listed five Corrie stars among her preferences: “In order: Peter, Simon, Gina, Tim or Kate who is getting on my wick.”

“It is Sinead, she dies next year,” speculated a third.

However, even though other names did pop up, Gina walked away with the dubious honour of having the most number of commenters calling for her head.

Illustrating the low opinion Gina is held in by fans, yet another remarked: “I know it is a soap and it should be sad but sorry to say I hope it is Gina. I think she is only one I wouldn’t cry for, lol.”

Some fans, however, felt the upcoming storyline – believed to take a severe toll on the mental health of Underworld boss Carla Connor – sounds like it lacks originality.

One fan complained: “Factory’s just been rebuilt, now it is falling down.

“Need new scriptwriters! Bring back a bit of laughter and joy instead of doom and gloom.”

New Corrie producer Iain MacLeod insisted the emotional plot would captivate those watching – although he didn’t give any hints as to who could cark it.

He recently told journalists: “We’re knocking the factory down in a colossal stunt.