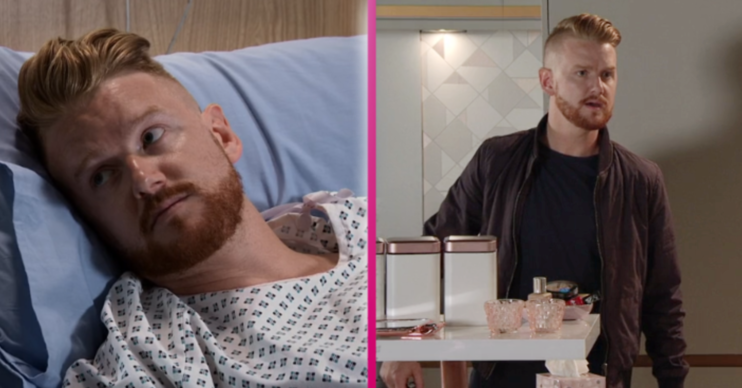 Coronation Street viewers have been left baffled by Gary Windass’s ‘speedy recovery’ after being hit by a car.

Last week, Gary was in an accident after he pushed his ex-girlfriend Sarah out of the way of an oncoming car.

The accident left Gary hospitalised with concussion, fracture ribs and internal bleeding. After being taken to hospital, he was rushed into surgery.

In last night’s episode (Monday, August 3) Sarah paid Gary a visit and he was still in hospital.

During her visit, they talked about Gary confessing to killing Rick and the dodgy businessman begged Sarah to keep it secret.

But when Sarah wasn’t sure, Gary also brought up the fact he knows Sarah played a part in Callum Logan’s death and cover up.

As Sarah left the hospital, unsure of whether to go to the police or not, Gary decided to discharge himself.

Gary quickly got out of his hospital bed and began preparing to leave.

Later back at his flat, he could be seen packing clothes into a holdall and leaving letters on the side.

But fans were baffled at how quickly Gary recovered after being hit by a car and needing surgery.

After Gary discharged himself from the hospital last night, it was clear he was still in pain as he made groaning noises as he moved around. He also appeared to be limping.

He was soon paid a visit by Sarah’s husband Adam who pointed out he was in no fit state to be discharged from the hospital.

Although it looked like Gary was preparing to leave the cobbles, he seemingly to change his mind after Adam’s visit.

When the solicitor revealed that Sarah told the police Gary saved her life and clearly hadn’t mentioned Rick’s murder, Gary took back the letters he left for Izzy, Maria and Nicola.

Later this week, Gary announces he’s not increasing the rent on the factory. Whilst Sarah is suspicious, Gary insists it isn’t a bribe.

Will Sarah keep his secret?