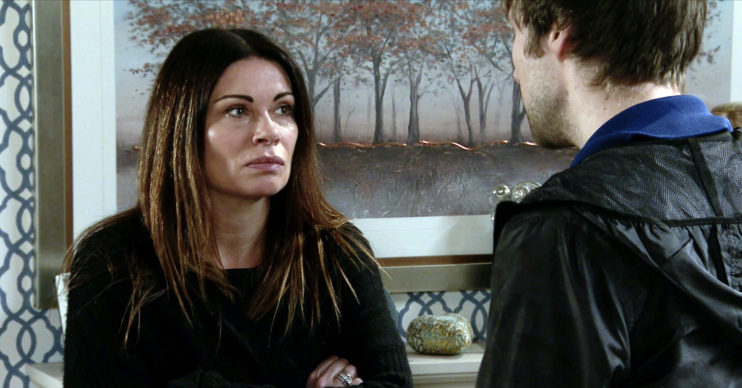 In spoilers for next week’s episodes, it’s revealed that newcomers Chelsey and Jordan show up demanding money from Carla as repayment for drugs she destroyed when she was staying in their squat during her mental health storyline.

When Peter hears Carla and Jordan talking he demands to know the truth and she later confesses that Jordan and Chelsey are trying to blackmail her.

When Jordan and Chelsey return to the Rovers, Carla decides to stand up to them. But Scott steps in and throws them both out of the pub and that’s the last we see of them.

Later, Peter heads out and when he returns there’s a news report on the radio about a serious assault of a man and woman on a local estate.

He turns the radio off so Carla doesn’t hear. But what could he be hiding?

Seeing the spoilers, fans of the show have admitted they’re ‘disappointed’ by the new storyline.

In a Digital Spy forum, one user asked what everyone’s thoughts were and they didn’t sound too excited.

One wrote: “Yawn. That’s my thought. I’d actually like to see some genuine character development for Carla, rather than the rinse and repeat trauma.

“She was a great character for the first few years, definitely one of my favourites but this cycle of over-the-top misery is just too much.

“Take her away from Peter. That ship sailed seven years ago. Bring in a new love interest for her, someone with a bit of money, maybe a single father with a late teenage, early twenty something daughter. Build a new family around her and actually progress her.”

A second commented: “Doesn’t sound very thrilling but hopefully it plays out well with a few surprises.”

Another added: “I’m disappointed. My theory was that Johnny had an affair with Scott’s wife which resulted in Chelsey, making Chelsey Carla’s half-sister and exposing Johnny as a serial home-wrecker.”

What did Corrie boss Iain MacLeod say about the storyline?

Speaking about Carla’s storyline at a recent virtual press event, Iain said: “What we wanted to do was revisit that at a point where Carla felt like she was on an even keel psychologically, and also just to fill in a few of the blanks really.

“Obviously we don’t know precisely what it was she got up to whilst she was away.

“We saw glimpses of it with the hotel and squat but we don’t know what happened.”

He added: “It felt like an interesting opportunity to delve into her recent story and generate something in the present that would reveal something we hadn’t known previously about somebody else in the show.”

Iain then spoke about the newcomers’ arrivals. He said: “So we meet two people we’ve never seen before, who emerge from Carla’s mental health story and what that provides in the present is the chance to see somebody that’s currently in the show elsewhere reveal their true colours.”