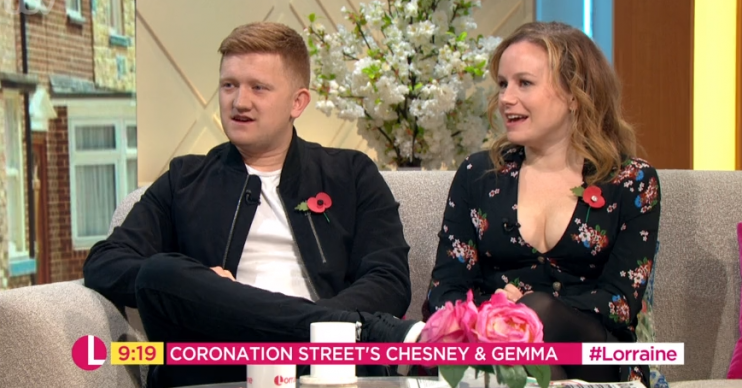 Gemma will give birth to her four babies very soon

Sam and Dolly, who play Chesney Brown and Gemma Winter in the ITV soap, appeared on Lorraine today (October 30 2019) to talk about the upcoming birth of their characters’ four babies.

Usually when soaps cast a baby, they use two babies per character, so Sam had suggested previously on This Morning that they would be working with EIGHT little ones.

Lorraine asked them: “So you’re going to have to work with four babies?”

But Dolly told her it would actually be five.

When she asked if it was five including Joseph, Chesney’s son played by William Flanagan, Sam said: “No. There’s five. Because normally when you have one child on the show, like a baby, obviously you have a double.

“So we thought we were going to have eight but actually there’s five. There’s triplets and twins.

“The twins are a boy and a girl and the triplets are two girls and a boy.”

Lorraine then asked if it was going to be bedlam or if the babies are very well behaved.

Sam then added: “We were really panicking about it but at the minute they just kind of sleep.

“You know obviously they feed, then they whinge a little bit.”

Dolly then revealed that she didn’t have much experience with babies saying: “I have no baby skills at all. Not at all. No.”

So with Dolly thrown in at the deep end, she’s going to learn fast!

So we thought we were going to have eight but actually there’s five.

Tonight, Gemma goes into labour mid air as she and Chesney are in a cable car.