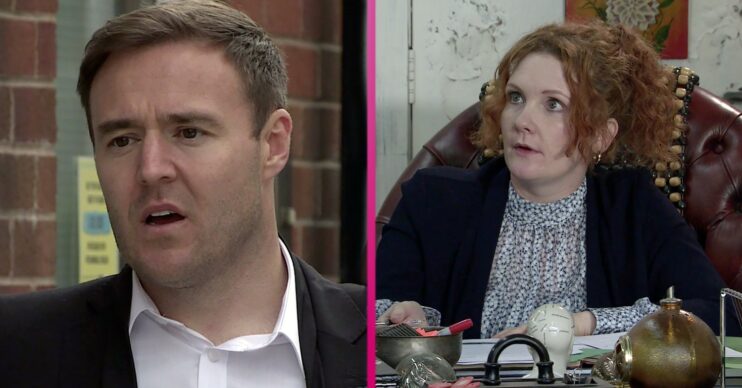 Coronation Street: Tyrone and Fiz will get back together, fans predict

Tyrone left Fiz to be with Alina

Coronation Street fans have predicted that Tyrone and Fiz will get back together, even though Alina is pregnant with his child.

Earlier this year, Tyrone left his fiancée Fiz for Alina Pop. He quickly moved in with Alina and she is now pregnant with his child.

Ever since they split, Fiz and Tyrone have been arguing on and off about custody of their daughters, Ruby and Hope.

However Fiz and Tyrone were brought together when they discovered Tyrone’s abusive ex-girlfriend, Kirsty, who is Ruby’s biological mother, had suddenly died.

As Tyrone was left to plan Kirsty’s funeral, Fiz stepped in to help and give her support, unaware of Alina’s pregnancy.

Coronation Street: Fans predict Tyrone and Fiz will get back together

However Fiz was furious when she discovered Alina’s pregnancy. She demanded Tyrone tell the girls about their new sibling before someone else did.

But fans are convinced that Fiz and Tyrone will end up getting back together.

#corrie Alina is so annoying, the sooner Tyrone and Fiz are back together, the better

I feel like Fiz and Tyrone will get back together #Corrie

In next week’s scenes, a customer at the furniture shop, called Phill, asks Fiz out for a drink, leaving her flattered.

It’s so obvious that Fiz and Tyrone are going to get back together.

Speaking to TV Times about a potential new love interest for Fiz actress Jennie McAlpine said: “It’s perfect timing and comes out of the blue.

“Fiz still has that downer on herself and thinks ‘Alina is gorgeous and I’m not.’ So it makes her feel like there might be a little life after Tyrone.”

However it sounds like Tyrone isn’t thrilled to hear about Fiz’s new love interest as Jennie explains Fiz’s attempts to move on with someone else leave Tyrone feeling jealous.

Jennie continued: “She’s like, I’m just going on a date with a guy, whereas you’ve moved in with another woman and you’re having a baby with her.”

“She’s glad she’s not in his shoes. Now that he’s got Alina pregnant, she’s like ‘a lot of people think you’re crazy, but do whatever you want.’ She’s got great friends and realises she needs to leave him to it.”

Coronation Street usually airs on Mondays and Wednesdays 7.30pm and 8.30pm. There is an hour long episode at 7.30 on Fridays on ITV.