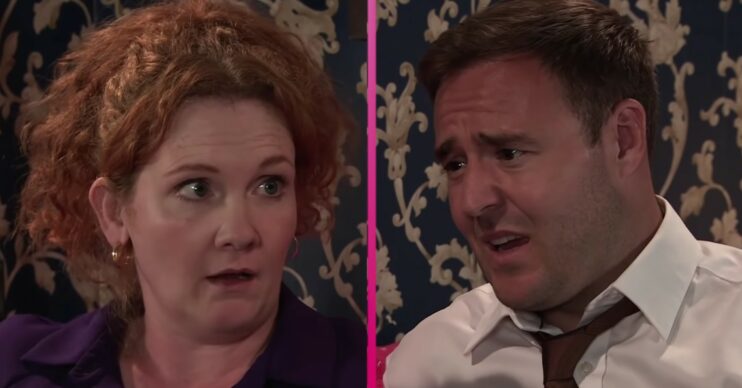 The former couple shared a shock snog last night as they bonded over their unhinged daughter Hope.

They split after Tyrone fell for nail technician Alina Pop – but last night proved their feelings are still strong.

Tyrone turned to Fiz and asked: “How do you still care about me after everything I’ve done?”

Fiz told him: “I’ve always cared about you, you plank.

“And even though it might not always feel like it – you care about me. I know you do.

“That’s what family is.”

Overcome with emotion, Tyrone grabbed Fiz and pulled her in for a kiss.

At first she kissed him back – but then pulled away from him.

Fiz said: “I was just about to say this isn’t a good idea but none of this has been a good idea, has it?”

Tyrone then poured his heart out.

“It was me,” he said. “All of it, everything was me. You have done nothing wrong, you hear me, nothing. What was I thinking?”

The pair then passionately kissed again – before Evelyn interrupted them.

Tyrone made his excuses and rushed out but it looked like the former couple were about to reunite permanently.

However, Coronation Street fans do not want that.

One said: “Come on, they’ve been in a toxic relationship for a while now. Breaking them up was a kindness.”

A second said: “No, they all shouldn’t get back together but Tyrone shouldn’t be with Alina either.”

A third said: “I am sick to the back teeth of Fiz. Poor me, always getting dumped on. Let her character move on with someone other than Tyrone.”