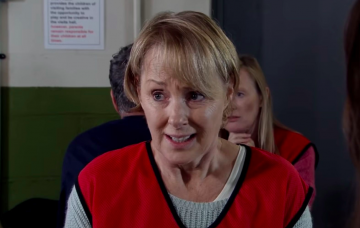 Is it all too late for Sally?

Sally has been left in prison after being set up for fraud by conman Duncan and next week things are going to get even worse for her.

As her husband Tim and daughter Sophie fight to prove Sally’s innocence she will be left in trouble in prison when she finds herself alone.

And when she is violently attacked, it doesn’t seem Sally can survive much longer in the brutal environment.

Even her scheming sister Gina realises the danger Sally is in and tries to do whatever she can to get her out.

The family are set to uncover a bombshell twist next week that could change everything and Gina is behind it all.

Actress Brooke Vincent revealed: “Sophie’s desperate to get her mum out of prison. She can see how vulnerable Sally is.

“Let’s face it, Sally’s really not cut out for prison life and Sophie knows they need to come up with some concrete evidence against Duncan fast.

“They’re all exhausting any avenue they can think of. Gina is desperate to put things right with Sally and I think she’s the one who’s really pulling out all the stops in a bid to show Duncan’s true colours.

“Sophie is a bit worried about how far Gina and Tim are prepared to go, but as time goes on, she gets swept up in their plans.

“Gina discovers some fresh evidence about Duncan and Sophie can’t believe it.

“It’s more than they dare hope for.

“It looks like this is the evidence they need, and Sophie and Tim are really hopeful that it’s enough to get Sally out.”

Sadly Gina’s discovery comes after she breaks into Duncan’s house and then stalks him to find out his secrets.

But when she tells the police what she has found out, they tell her it’s not enough to clear Sally’s name and so Gina hatches a new plan to free her sister.

Brooke added: “They plan a fake photo shoot to get Duncan’s daughter Olivia there under false pretences, hoping they’ll then be able to get information out of her which could be the key to incriminating Duncan.”

However when the answers don’t come as easily as they expect, Sophie is left alarmed when Tim reveals his own plan to beat a confession out of Duncan.

How far do you think Tim will go to free Sally? Leave us a comment on our Facebook page @EntertainmentDailyFix and let us know what you think!