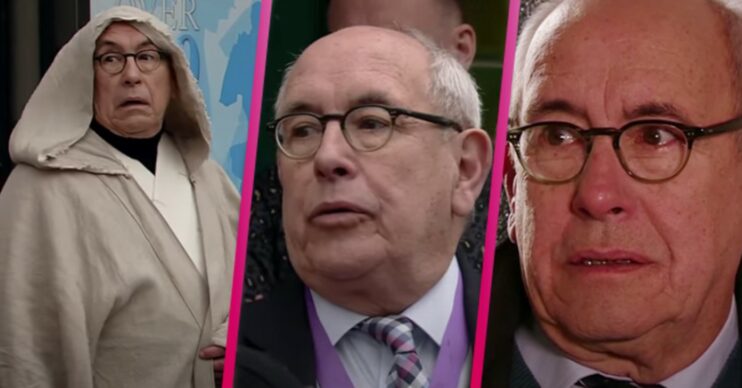 Norris has had some hilarious moments on the show

The character has been a part of the show since 1994,played by Malcolm Hebden, and has become one of the cobbles most iconic characters.

From hilarious moments, to the heartwarming, Norris has been a part of many of the cobbles iconic moments.

In 2017, Norris dressed up as Batman in order to try and stop Mary’s son Jude and Angie leaving with baby George.

Norris wanted them to stay for his good friend Mary and held up a sign saying ‘Grandfathers 4 Justice.’

He then went up onto the balcony of the Underworld factory, refusing to come down till Jude and Angie spoke to Norris.

During a fancy dress night on the cobbles, Norris dressed up as a woman and sang in a singing competition.

Of course, he won!

In 2005, Norris was horrified when he found Rita asleep in the living room in the Kabin flat and thought she had died.

He broke down in tears as he went to alerted Blanche, Sally Metcalfe and Jack Duckworth.

They all went to see Rita but were shocked when Rita woke up.

Blanche and Jack shot Norris a dirty look, however Rita found it hilarious.

4. Mary and Norris get married

In 2017, Norris married one of his closest friends Mary Taylor. However it was only to win a Mr and Mrs competition on Radio Weatherfield.

Their friends and family attended the wedding including Mary’s son Jude, Tracy and Gemma.

The two remained married until 2019, as Norris wanted a divorce so he could marry his fiancée Freda.

Many years ago, Norris won a competition by writing about his dream date with Piers Brosnan.

He entered the competition as Noretta Cole and won women’s underwear which Emily and Rita found.

Norris told them about ‘Noretta’s’ dream date with Piers, telling them about Oysters in a sea food bar, salsa dancing and a hot air balloon trip.

6. Norris and Mary dress up in Star Wars Outfit

As we’ve mentioned Mary and Norris got married to win a competition.

Part of this was to make themselves look like an actual couple.

For their ‘first anniversary’ picture, they decided to dress up in Star Wars outfits, making it look as if Norris had taken her to see Star Wars The Force Awakens.

Mary got Norris to pose for pictures at the bus stop. And it looks like Mary will pull out the Princess Leia outfit once again for Norris’s funeral. (We’re not crying, you are!)

7. Max squirts Norris with a watergun

Outside the Kabin, he demanded Norris give him sweets, but when he refused Max squirted him with water.

Norris went over to David’s house and demanded Kylie paid for his jacket to be dry cleaned.

However Kylie told him it had been ‘wet-cleaned’ before making fun of Norris’s child-sized jacket.

While there have been many hilarious moments between Norris and Mary, there was one moment which really broke the heart of viewers.

Mary explained to Norris she was raped as a teenager by a family friend and fell pregnant, forced to give up her baby by her mother.

Her son was left on the doorsteps of St Jude’s hospital and Mary discovered he had been called Jude.

Norris was in tears as he listened to his friend’s heartbreaking story.

Later Norris managed to track down Jude and reunited Mary and her boy.

A few years ago, Norris went down to the delivery office to get a package only to be met with a man named Morris Greaves.

Morris told Norris he needed to come back the next day as his package wasn’t in.

In typical Norris fashion, he tried to argue, however Morris wasn’t having any of it.

Norris wanted to report him, but Morris just shut the blind on Norris as he went on.

Mary ran out of the house screaming and yelled to Rita: “Rita call the police.”

Soon Freda came out and Mary attacked her, pinning her to the wall, claiming she was making a citizen’s arrest.

However Mary was shocked when Norris pulled up in a cab.