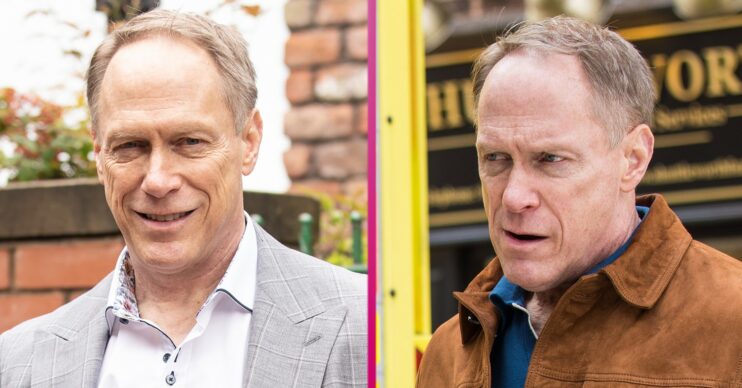 Stephen is coming back

Stephen will return to the cobbles this week, having been summoned by niece Sarah as concerns of Audrey’s drinking continue to grow.

Although it seems Stephen’s main focus will be on Audrey, it looks like Stephen may find some time for romance.

“First off quite quickly there’s an attraction between him and Elaine,” Todd said.

“Historically he was a bit of a toyboy and I love the repetition of that, he seems to be attracted to ladies who are a little bit older than him, not as much older as in the past as in the past but he definitely isn’t after he younger women on the street.”

How will Tim react to Elaine and Stephen?

Is Stephen being genuine?

He continued saying that Stephen may be looking for some security from Elaine.

Todd also revealed he’s been told that Stephen has been married since his last appearance.

Could she still be on the scene?

When is Stephen coming back to Coronation Street?

Stephen will return to the cobbles this week.

In this week’s scenes, Rita encourages Audrey to return to work.

David despairs when Audrey shows up in the barbers announcing she’s coming back to work before cracking open the wine and flirting with Ryan.

After tripping and falling over, Maria suggests she goes home but Audrey refuses.

Meanwhile Gail is at her wit’s end and tries to talk some sense into her mum.

However when Gail brings up Audrey’s drinking she says she’s moving home.

Soon Audrey ends up back in the barbers and staggers into a motorbike which falls and knocks her over.

The next day Audrey lies motionless in the barber’s having been there all night.

Brian and Elaine are passing by when they hear a weak cry coming from inside.

As Brian goes to get help, Stephen steps out of a taxi. He breaks down the door and is shocked to find his mum barely conscious.

Meanwhile at the Platts, they’re having a family meeting with Peter Barlow to discuss Audrey’s drinking.

Soon Brian comes in with news that an ambulance is outside for Audrey and she’s in a bad way.

When the family arrive at the ambulance, Stephen is furious with his family for not noticing Audrey was missing all night.

As he leaves in the ambulance with his mother, Gail feels guilty.